Melania Trump’s Christmas decorations: Straight out of The Handmaid's Tale?

The actual theme is ‘American Treasures,’ honouring ‘the heart and spirit’ and, clearly, the bodily fluids of the American people 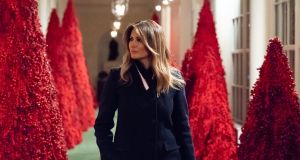 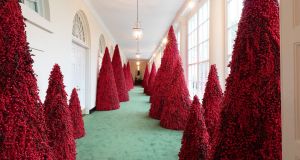 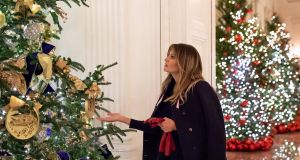 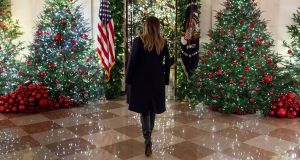 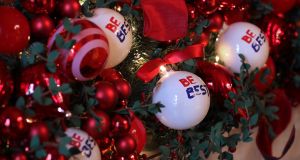 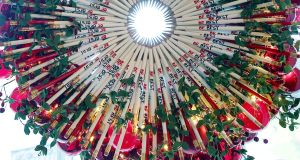 A Christmas wreath made out of ‘Be Best’ pencils hangs in a window of the White House. Photograph: Leah Millis/Reuters 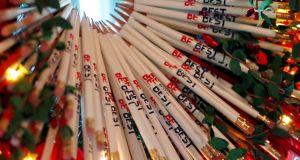 In a Christmas tradition on its way to becoming as hotly anticipated as the annual release of the John Lewis ad, or a stony-faced five-year-old explaining Brexit/quantum gravity/the importance of immersions in the Irish psyche on the Late Late Toy Show, Melania Trump has unveiled her 2018 Christmas decorations.

The video is 56 seconds long, but in case you’ve got better things to do for the next slightly-less-than-a-minute – such as fashioning your own Christmas decorations from belly button lint – here are the highlights.

The video opens with Melania dressed as Mrs Waterford from A Handmaid’s Tale in a swooshing, dark blue coat. Or maybe she’s being the Scottish widow. Either way, there’s undoubtedly a message in there to US president Trump, but like her “I Don’t Really Care Do U?” raincoat earlier this year, no-one, including Melania, appears to be quite sure what it is.

Melania’s spokeswoman, Stephanie Grisham, said the First Lady decided “to let the decorations speak for themselves”, so clearly they don’t have a clue either.

Someone did this to Melania Trump’s creepy Christmas trees, and it’s all I’ve ever wanted today. pic.twitter.com/MwigcZxswR

Trump’s hands appears briefly at the start of the video, helping her to sort through photos for her vision board. Oh wait, that can’t be Trump – these hands are much too big.

Canny Twitter users immediately spotted where Trump may have gotten her inspiration. As she wanders through the forest of death in her swooshy coat, she bears a startling resemblance to Aunt Lydia inspecting the handmaids in Margaret Atwood’s A Handmaid’s Tale.

Disappointingly, the theme isn’t  actually “Gilead”. According to the White House press office, it’s  “American Treasures”, and is a tribute to “the heart and spirit” and, clearly the bodily fluids, of the American people. According to the White House, the decorations involve 6,100m (20,000ft) of lights and 12,000 bows, 14,000 ornaments put up over the past few days with the help of 225 handmaids or, as the press office prefers to call them, “volunteers”.

She walks around touching ornaments with a look of utter astonishment on her face, possibly at the dubious grammar she encounters. “Be Best”, read several of them, mystifyingly. Is it a typo? Is there a “the” missing? Or is it an English as a second language idiosyncrasy?

A Google search reveals that “Be Best” is, in fact, is the motto for her anti-bullying campaign, likely inspired by Michelle Obama’s “Be Better” rallying cry. It turns out that Melania took it literally. If “better” is good, she deduced then “best” is ... well, best. Frankly, it makes “Make America Great Again” resemble the work of Heaney.

There is a wreath made of Be Best pencils because RECYCLING, dummy.

So what are the takeaways from the video? There’s only one. Be very, very afraid.