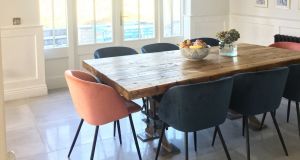 There’s an emerging cohort of interiors influencers on Instagram who’ve broken rank from posting highly-stylised house snaps, in lieu of documenting the warts-and-all reality of renovating or building their dream homes. These accounts are clocking up millions of likes every day as they divulge the minutiae involved in a refurbishment, from where tiles can be picked up at cost price, to bemoaning the state of the walls after the electricians left.

For anyone renovating or building, these visual chronicles provide front seat access to real design successes and failures, and most of the accounts provide direct links to almost every tradesperson or stockist they’ve used to create the finished product. Meet the new breed of Instagram Renovator, whose house transformation posts are the interiors equivalent of a gripping soap opera.

Serial renovator Rebecca Doyle is behind the transformation of a Victorian coach house in Royal Tunbridge Wells in west Kent. Although this is Doyle’s 14th renovation project, she’s adamant this one is her forever home. Her family took ownership of the coach house back in May 2017, and if it wasn’t for the proof on Instagram, it would be hard to believe the now spacious, glossy family domain, complete with outdoor swimming pool, bore any resemblance to the original home posted on her account.

“It was a total warren when we moved in, lots of tiny poky rooms leading into more small rooms, with dark, narrow corridors and very little natural light. The hallway wasn’t big enough to swing a cat and the presses in the kitchen were actually held together with Sellotape. Yet I had a vision and knew it had masses of potential,” says Doyle.

The unfolding of that vision on Instagram over the last 15 months has earned Doyle more than 73,000 followers, as she charted all the highs and lows of renovating and extending her period home from 2,300sq ft to 5,750sq ft. Her account deals with removing internal walls, rotten floor and ceiling joists, and asbestos elimination, as well as designing the perfect kitchen, adding six new bathrooms and refurbishing an old swimming pool.

Building a large Instagram audience has opened many doors for Doyle in the past year. She now has PR companies sending her samples of products, with furniture and lifestyle goods arriving daily and big brands knocking on the door with offers to collaborate, the most recent of which was with sofa.com.

But Doyle works hard to keep her followers happy. “I get at least a few hundred direct messages a day on my account asking for advice on paint colours, floorplans, recommendations for stockists and trades etc. I answer them all as best I can, as I feel it’s really important to help people and it used to drive me mad when brands would never get back to you about elements of a scheme.”

Doyle has also had many requests from devoted fans to take on the refurbishment and project management of their house builds too. Next year, she’s planning to launch a new business doing just that.

A&E nurse and blogger Triona Kearney took to Instagram in May 2017 to chart her family’s journey to build a dream home, Cherington House (named after the road she and husband Paul used to live on in London), just outside Kilkenny town.

“I really wanted to keep a record of the build progress, as much for me and my husband Paul as for the kids (Amelia (5) and Harry (3)), so we could look back on it in years to come, and Instagram seemed like a good platform,” says Kearney.

“My first post was just a picture of muddy fields and for the next nine months I visited the site every day, posting almost every step of the build from the foundations being laid to the door furniture going on.”

It took six months to get the exterior shell complete, so images of raw bricks, hard hats, scaffolding, and bulldozers dominated the account for the first while. “With each post, I gained more followers, but moreover, I got so much support, encouragement and useful advice along the way. My followers became like a sounding board for what to do next, or if I was caught between two styles of a fixture, I’d ask the audience,” says Kearney.

Almost 18,000 followers and 18 months later and the 2,750sq ft, five-bed, Georgian-inspired build is now complete. “We moved in last April, even though it wasn’t nearly finished. Most people don’t move into a turnkey house where everything is perfect and so many people have thanked me for showing the reality of living with lots of builders and tradespeople around you and doing up a house, bit by bit, as and when we can afford it and whenever we get spurts of energy to do more painting etc.”

Kearney says her bargain-hunting instinct is what gets the best reaction online. “I love a good deal and research for hours online checking prices outside Ireland, and it pays off – I got most of the taps, hardware and our lighting from Amazon and the lightingcompany.co.uk, at one-third of the price compared to the shops here for the exact same fittings. I saved €5,500 on sanitary ware by buying everything from the UK and our engineered wooden floor that runs throughout the house was half the cost by getting it from Direct Wood Flooring in the UK.”

Her account is living proof that you can create stylish interiors schemes with more dash than cash.

“Although this is my first house, it’s not my first refurb rodeo,” says Laura McLoughlin by way of explaining how she pulled off the complete gutting and refurbishment of a three-bed, 1950s semi in less than 13 weeks this summer.

“I’ve project managed the builds, maintenance and revamps of my salons four times so far, so I’ve a bit of experience at this lark,” says the owner of the Burgundy Beauty chain. “I’ve always put my life up on Instagram and have followed house build accounts for a few years now. They’ve opened up an entire world of interiors and building to me that I would never have access to without Instagram, so posting my journey is kind of like giving something back,” says McLoughlin.

Woodworm, rotten joists, dated windows and doors, zero insulation, poky floorplans and dated driveways are just a few of the issues McLoughlin illustrated on her Instagram feed. She uploads satisfying before and after shots of the house and says her house transformation, although dramatic, is just the beginning.

“We are planning a big extension next year, so we made sure the builder put in an RSJ at the rear of the kitchen to save time and costs later. Our current kitchen was fitted out with basic cash and carry units as they will become the bones of the utility room in the future. Ironically, my kitchen worktop has probably gotten the biggest response from my followers so far. Yet it’s only marble effect laminate from The Panelling Centre. The whole thing has been one steep learning curve; sometimes you nail it, sometimes you make bad decisions, but when you get buoyed on by followers, their feedback and encouragement helps you feel like you’re on the right track.”