The Leeson Street rebels who were the original ‘storm troopers’ 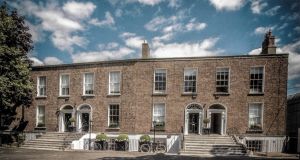 Nos 86-89 Upper Leeson Street, which were threatened with demolition in the late 1960s. Photograph: Andy Sheridan

It was the tumbling of perfectly fine Victorian villas on Burlington Road in the late 1960s, to make way for office blocks, that spurred Carmencita Hederman, a future lord mayor of Dublin, to get together with many of her well-heeled neighbours and form the Upper Leeson Street Area Residents’ Association.

In 1993, to mark Ulsara’s 25th-anniversary, I wrote a feature for The Irish Times under a headline that characterised its members as “the Leeson Street storm troopers” – a back-handed compliment from Lisney’s Peter Kieran, who said the mere mention of the group’s name was enough to set alarm bells ringing among developers and their agents.

“To many an estate agent, the very name conjures up nightmare visions of Carmencita’s storm troops issuing their stern warnings before descending on the next [city] council meeting.”

Whole streets were being preyed on by ‘the Corpo’, to be laid waste to over decades and then transformed into dual-carriageways to cater for traffic from the suburbs

And Kieran conceded that the association’s years of vigilance had paid off – as exemplified by the public park in the middle of Dartmouth Square.

Of course, women were to the fore in protesting against the destruction of Dublin, architecturally and socially. Máirín de Búrca led the Dublin Housing Action Committee, while Deirdre Kelly, founder of the Living City Group, was one of the stalwarts of the Hume Street occupation, alongside Duncan Stewart, then a dashing young UCD architecture student.

As Erika Hanna noted in Modern Dublin: Urban Change and the Irish Past, 1957-1973, Deirdre Kelly (who died in 2000) was influenced by the great American urban champion Jane Jacobs, and saw Hume Street as part of a larger struggle against “ruthless speculators ridding the city centre of its inhabitants and creating an anonymous office zone”.

Whole streets were being preyed on by “the Corpo”, to be laid waste to over decades and then transformed into dual-carriageways to cater for traffic from the suburbs. There was even a dastardly plan in the 1960s to replace the city stretch of the Grand Canal with a virtual motorway – mercifully killed off by Brian Lenihan snr, then minister for transport.

Property developers were on a roll during this period. Mont Kavanagh’s Hardwicke was very active in the southeastern sector of the inner suburbs, building at least two of the office blocks on Burlington Road, while PV Doyle managed to get planning permission for a huge hotel on Sussex Road that was the biggest in Dublin for decades, and called the “Burlo” by everyone.

Alarmed by the rampant demolitions on Burlington Road, residents of Upper Leeson Street and its environs feared that their attractive area would be consumed by this plague. At the time, unscrupulous estate agents were knocking on the doors of houses in Leeson Park, trying to persuade their owners to sell so that the whole area could be developed for offices.

As none of its fine Victorian houses were yet listed for preservation, or even protection, they could have all been demolished to make way for purpose-built office blocks, and Leeson Park would suffer the same fate as Burlington Road, becoming an extension to the ever-expanding Ballsbridge office zone. In short, a rearguard action was urgently needed.

It was, of course, an uphill struggle. Carmencita Hederman and her well-spoken “storm troopers” were talking a different language to the developers and equally suburban-minded bureaucrats who ran Dublin Corporation, as it was then known, who simply didn’t understand why people would get so exercised about “progress” in the city.

Ulsara’s main focus was to keep people living in the area, reasoning that this alone would be enough to ensure that its amenities would be preserved. However, property values were boosted by this, and Carmencita bitterly regretted that the area lost the social mix it had in 1968, along with many tradesmen who once populated its mews lanes.

She went on to represent the Pembroke ward after heading the poll in 1974, becoming an outspoken alderman in the same year and a very distinguished lord mayor of Dublin in 1987. She was proof that “ordinary housewives” – as long-serving Ulsara chairman Desmond MacAvock described them – could master the intricacies of our arcane planning laws.

By then, Ulsara had organised itself into six branches representing Upper Leeson Street, Leeson Park, Appian Way, Dartmouth Square, Waterloo Road and Wellington Road. As I noted in 1993, they all kept an eye on what was happening in their areas, carefully monitoring Dublin Corporation’s weekly planning lists to spot unwelcome developments.

But maintaining the residential character of the neighbourhood against the onslaughts of “pinstripe-suited vandals” was not their only success, as MacAvock noted in 1993. “At least equal has been the fostering of a sense of community in what, without the association, could have been very sectionalised areas having little or no contact with each other.”

In other words, power to the people – for a change. Indeed, Ulsara’s experience over the past half-century should be studied by others facing similar threats, because it provides a template for how communities can come together to defend what’s important to them against malign forces that would change things utterly, if they got a chance to do so.