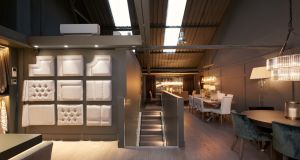 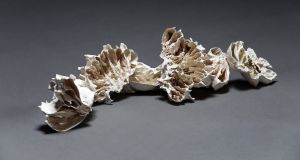 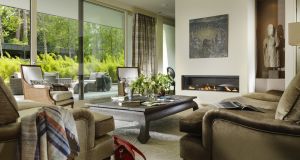 Interior of the Park apartments in Kenmare, which start from €495,000

There are various sets of deeply comfortable, enveloping dining chairs upholstered in rich, velvety shades, as well as striking mirrors and lighting designed to throw a warm glow over guests.

An entire wall is given over to a range of upholstered headboards that can be ordered in hundreds of fabric choices, from leather to linen to silk, wool, velvet and chenille. Prices start at about €500 for an upholstered and buttoned headboard, with fabric extra. The new showroom is located in Deansgrange Business Park, opposite the NCT Centre; 01-82084801, ventura.ie.

A New Collective is the name of a week-long exhibition of glass works and ceramics by National College of Art and Design (NCAD) students, which has just opened at Gallery Zozimus on Francis Street, Dublin 8. About 20 students have contributed work to the show, with the prices of items on display ranging from €80 to €700.

The students, who are part of the NCAD Conscious Makers group, include undergraduate and postgraduate students from the department of applied material cultures. Their work includes everything from blown and etched glass installations, including Irene Duffy’s spooky series of bell jars, to Maeve Treanor’s sophisticated, minimalist ceramic and brass light fittings.

It’s the 11th student show that Zozimus has run and, according to Vincent Kelly of the gallery, “this is definitely one of the best”. Worth a look.

Red Earth Interiors in Sandyford, Dublin 18, has a vast selection of clocks, from classic bedside timepieces to large-scale, wall-hung models with a vintage twist. The Irwin wall clock, for example, is like a giant pocket watch with its Roman numeral face and faux winding device. It costs €99.95.

Apartments at the Park

In 2008, when Francis and John Brennan launched 18 holiday apartments in the grounds of the Park Hotel, Kenmare, they were aiming them at Celtic Tiger folk seeking a bolthole beside their five-star spa.

Their timing, as we now know, was terrible, and the day they received the keys from the builder was the day Lehman Brothers collapsed. Plans to sell the €1 million-plus luxurious apartments had to be shelved.

Nine years on, the apartments are selling quietly at prices from €495,000, and 13 of the 18 properties are now gone, two having sold since January.

“We never did a hard sell and they moseyed off one by one,” said John Brennan.

For a half-million or so, you could expect a 1,300sq ft two-bedroom en-suite property with two car-parking spaces, separate storage, and access to all the hotel facilities and the Sámas Spa.

The apartments are all ready to move into and new owners will have the option of having the Park interiors team help with the furnishing and fit-out. Originally, some of the fitting-out of the show apartment was done by bespoke furniture designer David Linley, and that is still possible.

Apartments are for personal use only and renting them out, short- or long-term, is not allowed. The service charge is €2,500 per annum.

Last October, the brothers worked out a deal that involved Fergal and Rachel Naughton of Glen Dimplex coming on board as investors. The Naughtons already have an interest in the Park as long-term guests and owners of an apartment in the hotel.

Their injection of funds has allowed the Brennans to begin a refurbishment programme over the winter, and 10 hotel bedrooms have been done so far. All the corridors have had the wallpaper and carpets replaced, and two bathrooms have been finished at a cost of €46,000.

Apartments at the Park are for sale through Ganly Walters; ganlywalters.ie.

How to wear luxury in lockdown with Louise Kennedy
10