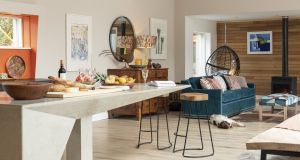 We’re living in a needs must time, whatever it takes to get the job done is the currency du jour. French woman Isabelle Bouiller and Jonathan White were ahead of the curve when they started work on their dream house about five years ago.

Bouiller, from Le Puy en Velay, lentil country in the Haute-Loire, came to Ireland at the age of 16 to boarding school at Wesley College school. It was here she first met White, although it was years later before any romance blossomed.

They had viewed several houses in the Wicklow hills when they came across an old stone cottage that had been extended several times in the townland of Sheanamore and the sloped site resonated with them.

Originally a single-storey cottage, it had been extended on numerous occasions, explains their architect Kim Dreyer of Dreyer Architecture, himself a Dane from Copenhagen, living in Wicklow for more than 20 years. “It was a house that was lovingly built by a family of old hippies and looked as if it had been abandoned in 1973.”

He suggested keeping the exterior stone walls of the cottage, building a modern shell within them and adding a second floor. This is now the accommodation wing of the house and is connected to the new, barn-like living wing, a single-storey extension that runs perpendicular to the original property.

The house was built in two phases. Once the old house had its plumbing, electrics and flooring, the family moved in initially using the large landing, illuminated by a sizeable slit window on the stairwell, as their kitchen. This is now an open lounge area.

Bouiller did not want to live in a cold house. Luckily for her, White is an engineer and one of his businesses, LVP Renwables, specialises in the installation of underfloor heating using an air-to-water heat pump as well as thermodynamic hot water systems.

The house has been hyper-insulated, has alu-clad triple-glazed windows and underfloor heating throughout. They have hot water on tap and 15 different heating zones within the property. “Each room is set to a target temperature and can call in heat from the pump as needed,” White explains. The pump is programmed to run at night to take advantage of the cheaper rates making the house toasty and warm when they get up in the morning. It retains the heat throughout the day because of its insulation levels.

Bouiller brought her decorator friend Collette Ward on board to discuss the finishes, colours and basic design of the space, Ward explains. “I suggested lighting, where furniture would go, the kitchen layout and the position of light and plug sockets,” explains the decorator, who is originally from Donegal but is also Wicklow based.

The home’s beating heart is its open-plan kitchen livingroom. The vaulted ceilinged space has barn-like, exposed Douglas fir trussed rafters. These help bring in texture and the warmth of the wood radiates through the space.

A long window brings in natural light to the kitchen counter. Ward suggested the concrete frame that surrounds and the block of burnt orange colour, Charlotte’s Locks by Farrow & Ball, a shade the redheaded decorator is rather partial to. A splashback made of Perspex protects it while subtle task lighting makes the space work in darkest winter as well as long summer days.

The Kingsbacka kitchen units, in matt-finish anthracite, are made from recycled wood and plastic PET bottles, from a range at Ikea. The wallpaper around the hob is Cocktail, by Cole & Son, most apt for a house as hospitable as this one, Ward says.

But the real talking point here is the artful concrete island, a design by Cillian Johnston that Bouiller had long admired in his Delgany-based showroom. She called him up to see if she could negotiate a deal price and he told her he would gift it to her, on condition that she could find a way to get the 1,500kg structure, that had been poured in situ, out of his showroom without damaging his beautiful walnut, herringbone floors. White arranged for a heavy lift contractor to manually lift the island onto jacks, then onto floor skates and rolled it out of the building having laid sheeting board atop the floor to protect it.

Using a crane set on the back of a truck the poured concrete piece was lifted and transported to the site where it was positioned atop the concrete foundation of the new build part of the house. “We lifted the island in with a crane before we built the walls or had even put the roof on,” White explains. And there it remained, protected from the elements by bubblewrap and pallets, as the house rose around it. It also meant that they had to figure out where it was going to be positioned and would have to stick with that decision once the screed for the underfloor heating was poured.

Ward used the bay window across the room to frame the dining area, building in banquette seating around the glazing to best take advantage of the panoramic views of the hills. It is covered in an Hermes shade of terracotta that is wipeable, a good thing since the seat can fit about seven kids.

“That’s a lot of chocolate fingers to deal with,” Ward says. The dining table is inspired by one that she spotted in an airport that she photographed and that White had fabricated using local Wicklow planks. The benches were a last-minute purchase from Ikea, to give party guests somewhere to perch.

In total the house has five bedrooms, four in the old part where the small, cottage windows are ideal. The couple’s three kids, Charlotte (12), Leon (11) and Zola (7) are delighted with the set-up. Previously Leon had shared a bedroom with his sisters and finally has a room of his own.

In the livingroom there are Ward-designed teal-coloured velvet sofas with nickel studding. These were bought before the project was completed and spent several months living in her shed. Thistle, a warm grey by Colortrend and Honey Gold, a soft mustard by Sanderson, cover the walls. Underfoot is a faux hide rug, which the decorator says is great in a house with dogs as they tend to chew the real skins. The wood stove burns windfall from the property while the wall’s cedar slats originally featured on the exterior of the house have been repurposed here. The copper sconces look great against the bare brickwork. These, as well as the leather tub chairs and kilim-covered ottoman can all be sourced through Ward.

It was Bouiller who painted the ceiling’s shiplap boards while White and the kids were on holidays in France. “The weather was amazing and I spent most of the time in my knickers,” she recalls, as only a Frenchwoman can, Ward quips.

She also repurposed every tile that you see in the hall, removing them using a chisel and hammer and then shaving on residual concrete using an angle grinder.

It was such a labour of love, Ward says. “They had such a vision and they kept slogging away at it. I would have run away screaming and I do this for a living.”