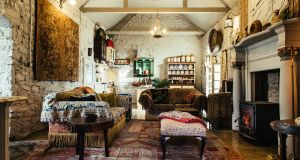 Inside the Cow house in Portlaoise.

David Keane, proprietor of the Store Yard in Portlaoise, is a self-professed hoarder who turned a hobby into a profession. The former builder developed large commercial sites around Co Laois during the boom but when building work dried up in the recession, necessity turned him into a dealer of antiques and salvage.

His hobby was scouring auctions and salvage yards and, travelling the length and breadth of Ireland, England and Europe, accumulating materials, from furniture and textiles to period doors and windows as well as shop furniture, he eventually had to house it in an industrial yard in the midlands town.

“I was a hoarder,” he recalls. “I am especially attached to things that have a rural or country look, be it a worn-out wooden spoon or a bowl used for generations,” he says. Textiles too, especially old Irish linen and Carrickmacross lace that he leaves out in the dew for three nights to remove age spots, also hold a certain place in his heart.

It was his late friend Noel Mel, an art dealer who was his wingman on these trips, who showed him the way. Noel was a dealer. He sold on his buys. Keane was a collector. But needing a new revenue stream he opened his storage unit as a shop, in the beginning opening only three days a week, and its 30,000sq ft of shopping is a kind of décor lucky dip, for you never know what you might find.

Purveyors of the unusual furniture and furnishings from the Store Yard now grace some of the country’s best establishments including the recently refurbished gardener’s cottage at Ballyfin and Ballinahinch Castle.

Recently Keane refurbished the cow byre on his farm where you can immerse yourself in a short-let interior that fuses Irish country with decorating’s maximalist mood.

Everything you look at in this two-bedroom abode tells a story. An oval window, high in a vaulted sitting room, acts like a kind of decorative pineal eye gazing down at the salvaged pine boards on the chimney breast in the sitting room that came from Adare Manor.

The fireplace, warmed by a wood-burning stove that burns seasoned timber cut on the farm, came from a house in Roscrea, Co Tipperary, while the panelling, painted a soft sage green, is repurposed timber and MDF from Shaws stores, those of the “almost nationwide” ad tagline.

In one of the alcoves is a sawfish rostrum while a console table in another corner started life as a 19th century alter that came out of a convent in Stradbally 25 years ago. It has decorative glass panels that have been painted red and gilded.

Atop it is a swan that once swam on Galway’s Claddagh and has been immortalised by a local taxidermist with its wings aloft in pose that is reminiscent of Oisín Kelly’s Children of Lir in the Garden of Remembrance.

A pair of Georgian glass doors lead through to the master bedroom where a chinoiserie spread covers the bed. Made from an Osborne & Little fabric it once graced one of the suites at Ashford Castle. Keane has teamed it with Flemish tapestries and a worn Persian carpet underfoot to create a richly textured nest.

The kitchen has been repurposed. It came out of the first property Keane bought in Portlaoise about 25 years ago. He added a stainless steel top from an industrial kitchen unit. But the real talking point here is the original Irish dresser that came out of a house in Bennettsbridge.

The 18th century pine design is one of numerous vernacular pieces that he has purchased, some of which he rents to film companies for period drama productions. The stoneware jars atop it come from a selection of general merchant shops across the midlands while the wall-hung pot rack is an original Georgian spit rack.

In a globalised world where more and more interiors look the same whether you live in Dublin or Dubai, Cork or Copenhagen, The Store Yard’s approach is a beacon of individuality. There’s an eco element too to buying its repurposed or salvaged selection.

But for Keane the real grá is the fact that some of the pieces were made by candlelight using hand-crafted tools. “Our gear is different and is often worn with age. I like it showing its age. I like homespun stuff made by mothers and grandmothers. I have an affection for age-worn patina.”

Just don’t try to sell him anything too polished. “Over-restoration is the Botox of the furniture world. You’re taking all the years of history off it.”

Situated between the Heath and Stradbally, in the townland of Corrigeen, the Cow Shed is available to rent during Electric Picnic; see thestoreyard.ie

Share your home story: Have you recently extended, renovated or built your home? If so, we’d love to hear how you got on. Please email homeanddesign@irishtimes.com