Portmarnock scheme with wide appeal for quality and price from €350,000 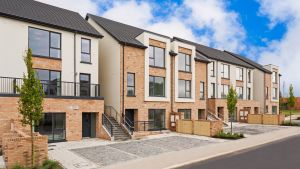 Dun Sí, a new development a two-minute walk to the Dart at Portmarnock, launched last March, and its first phase of 40 three- and four-bed homes has already sold out .

This week 20 units go on the market; 10 two-bed apartments at ground floor level set under 10 three-bed duplexes, which are being sold by Savills.

The feeling of space is impressive throughout; ceilings are 2.7m high and there is lots of storage. Combined with fair asking prices, the A-rated Ber and good train connectivity to the city, these units will really appeal to home hunters despairing of the lack of value in the second-hand market.

The hallway hides over 3 cubic metres of storage behind double doors.The broken plan living space is cleverly divided to fit the sitting area to the front with lots of room for a dining table, and the U-shaped kitchen is hidden from sight by a 25cm lip. It is a discreet way of keeping the engine room on show but prep work out of sight. The units have soft white matt doors by Kube Kitchens and Neff appliances.

Another attraction is the generous utility room with almost 6.5 cubic metres of space, ample room for a clotheshorse and wall-hung drying racks.

The two bedrooms feature floor-to-ceiling wardrobes by BSpace. The master has a shower en suite.

Bigger than many three-bed homes these are accessed via sets of beautiful bullnose granite steps and each has a separate living room and kitchen. In the show unit living room there is an enormous U-shaped sofa, designed by Optimise Design and fabricated and upholstered by Gerard Croft of The Sofa Factory.

Some of these 10 units come with two balconies, a north-facing one off the living room and a second off the kitchen. In these the accommodation upstairs is set out as two doubles, both roomy, and a single room that extends to about 12sq ms. The other duplex units have three sizeable doubles.