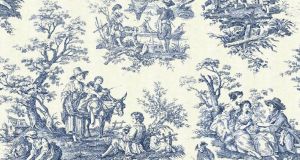 Toile de Jouy: Famous artists including Fragonard were commissioned to create designs and thousands of different ones were produced at the Jouy factory.

The popularity of Toile de Jouy has endured for more than 250 years. Literally it means cloth from the town of Jouy near Versailles in France where it originated, but it has come to mean a single-colour print usually of a historic pastoral scene on a white background. With cotton now taken so much for granted, the history of the development of this delicately decorative fabric is worth noting. When cotton arrived in France from India in the 17th century, it prompted panic at government level, with fears the new light and versatile fabric that could be used for clothing and home furnishings would seriously damage the indigenous silk and wool industries. So it was banned for nearly 100 years – although it was imported clandestinely.

When the ban was lifted in 1759, pent-up demand resulted in several factories springing up. The Oberkampf factory in Jouy-en-Josas produced simple printed fabrics, typically with geometric or basic floral designs using woodblock printing, which tended to produce crude, rather small-scale repeated patterns. Copper-plate fabric printing which was already being used in Ireland – where it was invented in the 1750s by Francis Nixon – crossed the channel and it facilitated large-scale, highly detailed patterns at Jouy with themes ranging from bucolic country scenes to allegorical images. It also allowed for a more sophisticated approach to colour as it permitted a more subtle approach to light and shade.

Marie-Antoinette – who visited the factory in 1781 – and Empress Josephine adored it and it soon became highly fashionable for aristocratic interiors. A toile-de-jouy bedroom with walls and bed covered in the printed design became a popular choice – and to get a cosy and classy look particularly in old houses it still is. Famous artists including Fragonard were commissioned to create designs and thousands of different ones were produced at the Jouy factory. By 1805, the Oberkampf factory employed more than 1,300 people and the factory closed in the 1840s. Without the protection of copyright, the designs were widely copied and applied to everything from wallpaper to plates.