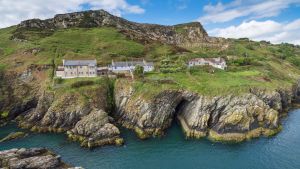 Cliff Bungalow is perched high above Puck’s Rocks and Devil’s Rock at the point where the cliff path walk around Howth head begins. Built in 1847, it’s a timber-framed semi-detached house – in which all the rooms are timber-panelled – that has been in one family since 1905 and needs complete refurbishment.

Accommodation consists of three bedrooms on one side of a hall, a bathroom at the end of the hall and a livingroom and a kitchen on the other side with views of the sea. It isn’t listed but is in a special amenity area, and could not be knocked down.

A local architect has drawn up a feasibility study for the property, and owner John Connolly believes new owners could get planning permission to build a glazed extension the width of the house on the sea side. This would take up most of the small cliff edge garden.

The house has not been refurbished since it was built, apart from being re-roofed in the 1970s by the owner’s parents. He grew up in Cliff Bungalow, a house inherited by his mother from two great-aunts, sisters called Carmody, who bought the house and Cliff Cottage – the other half of the semi-detached, now the home of Connolly’s sister – in 1905. They ran the two properties as a guesthouse with a door linking the two – but it also operated as a safe house.

Both sisters were members of Cumann na mBan and had been responsible for giving the all-clear for the Asgard to sail into Howth harbour with its cargo of guns in 1914.

Michael Collins stayed here during the War of Independence, and the story goes that a final draft of the Anglo-Irish Treaty was kept overnight in the bungalow on Collins’s trip home from London to discuss it with the Irish cabinet.

An architect’s cottage refurb: ‘It was a beg, borrow and steal project’
2

Do women come out much worse off from a pandemic?
8