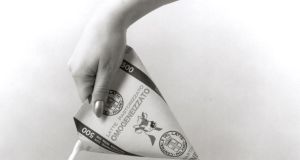 “Doing something that no one else has every done before is actually quite hard,” said Dr Ruben Rausing, the Swedish inventor of the Tetra Pak – an economist who, as a student in New York, figured that the rapid growth of consumerism he saw gripping 1940s’ US would spread to Europe – and new packing would be needed to meet the explosion of new products.

His first interest was developing a paper package for milk and he devised a box with four triangular sides – a tetrahedron – like mini-pyramids. He named his company Tetra Pak.

And while the triangle worked from the consumer point of view in that it was easy to open, filling each small pyramid in the factory was messy and difficult. He solved the problem, he said, after a conversation with his wife, who reminded him how she made sausages by continuously filling a long tube and then twisting it at a point needed to make each sausage.

It proved the basis of the paper packaging company’s massive success and the 20th-century revolution in packaging liquids, particularly dairy. Rausing started his factory in Sweden in 1951 and among many other paper materials innovations, that triangular shape gave way to an easier-to-ship box shape. By 1977, with Tetra Pak factories spreading globally, the company reached a manufacturing milestone with production exceeding 20 billion units.