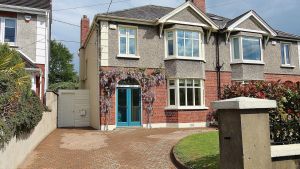 At its busy open viewing on Saturday morning, viewers of 2 Seapark Road – typically young families with small children, some still in their sports gear from a morning match, Clontarf not being short of family-friendly amenities – tended to congregate in the spacious eat-in kitchen, a bright welcoming room clearly added on by the owners in recent years.

A thoroughly modern addition, it is floored in the same reclaimed herringbone parquet as the hallway, and features other retro touches such as the Belfast sink and cast-iron radiator.

There’s a substantial island, and the painted units are topped with granite worktops, all flooded with light from the extra large rooflights. A good-sized utility room is fitted in the same style as the kitchen units, and there’s a downstairs toilet.

The pretty looking timber studio at the end of the lawned rear garden, plumbed and wired, was also a draw for many viewers speculating about its many possible uses.

The 1930s house with 148sq m/1,593sq ft at the Mount Prospect Avenue end of this popular Clontarf road has three bedrooms, two doubles and a single – the main bedroom had its en suite added when the house was extended. There would appear – from looking at what some neighbours have done – to be scope to extend up into the attic to provide a fourth bedroom.

The two main reception rooms interconnect, with the back room opening directly into the kitchen. The original chimneypiece in the front room has been replaced with a larger sandstone version, while in the rear reception an enormous almost floor-to-ceiling mirror dominates the chimney breast.

There is off-street parking to the front and invaluable side pedestrian access.

The house has a C2 Ber as during the renovations particular attention was paid to insulation, while the windows are double-glazed Rational.

I live in direct provision. It’s a devastating system – and it has thrown away millions
4

Inspiring style: reboot your home with these fresh interiors ideas
7

Vacation once again: A night at a campsite, a five-star hotel and a full-Irish B&B
Real news has value SUBSCRIBE