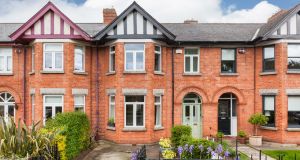 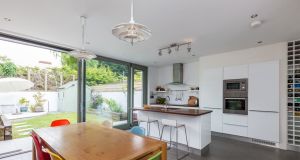 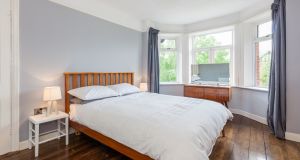 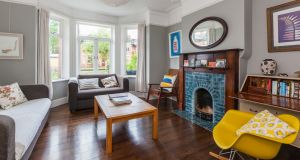 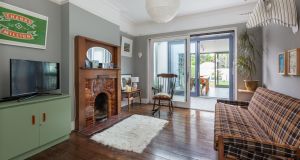 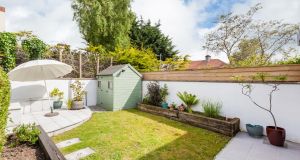 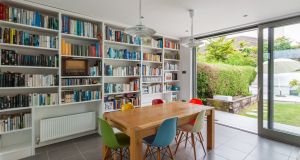 Part of the extended area.

Turning off Drumcondra’s Griffith Avenue onto Clare Road, it’s a surprise to find the elevation high enough to give views right across the city to the Dublin mountains.

The houses lining the road that leads down to Homefarm Road are from mostly different decades in the early part of the 20th century and number 34 is in a terrace of four similar redbrick houses that were built in the 1930s to look not dissimilar to the Alexander Strain houses in nearby Glasnevin.

The owners bought this three-bed house 10 years ago and did considerable work, first renovating and updating before realising they needed an extension. The build across the rear has made all the difference: the contemporary square-shaped room is a light-filled kitchen/diner featuring extensive glazing with floor-to-ceiling sliding doors opening out to the back garden and a further set of doors opening into an inner courtyard. The added work brought the house to 124sq m (1,334sq ft). A utility room is off the kitchen and there is also a guest toilet.

The owners were drawn to the house because of its original features including the timber and tile chimneypieces in the nicely proportioned interconnecting reception rooms – the front with the bay window. The rooms are joined by the original pocket sliding doors. The rear reception room opens into the new internal courtyard which means the extension didn’t rob this back room of any light as can often be the case.

Upstairs two of the bedrooms are good doubles, the third a single. The owners left the original two sash windows in the bathroom (the windows are replaced elsewhere) and they opted for a large shower instead of a bath in the good-sized room.

The owners’ decorative approach, with includes muted colours on the walls in the living rooms and dark polished floorboards, as well as sleek contemporary kitchen units, is stylish – giving new owners little to do.

There is off-street parking to the front for one car and the rear garden has been landscaped.