Glencar was last sold by the Golfing Union of Ireland (GUI) in 2004, since then it has been transformed to a carefully considered modern family home 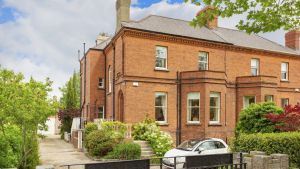 Dublin’ s grander period homes can sometimes feel like set pieces, with the “good” rooms at hall level relegated to special occasion use and all the living is done at garden level away from the lovely light-filled scale, soaring ceiling heights and ornate cornicing of the upper floors.

Glencar House, number 81 Eglinton Road, an elegant two-storey over garden level Edwardian that was built in 1908, very much makes use of its upper rooms as a fully functioning modern family home.

The property last came to market in 2004 when its former owners, the Golfing Union of Ireland, sold it at auction. Guiding €3 million, its sale realised more than €2.7 million.

Back then the property measured 269sq m (2,901sq ft) and its original features, including a sweeping staircase in its inner hall, arched windows and delicate plasterwork wowed the new owners. They undertook a very nuanced make-under that included rewiring and replumbing, upgrading the heating system and extending it by another 45sq m to its current size, 314sq m / 3,380sq ft.

The main entrance, at hall level, is unusually via the side and not the front of the house. The inner hall, with its sweeping mahogany staircase, opens to a drawing room to the front that is in everyday use. It has a fine triple sash bay window which, like all the windows in the house, still has its original shutters. Ceiling heights at this level are 13 feet giving a great sense of space and the scope to accommodate any style of furniture.

The room to the rear is now the kitchen where units by Country Kitchens and a sizeable cream Aga work well with the period surrounds. But it is the addition of a sunroom, a vaulted roof space with light on three sides that turns a north-facing aspect into something that wouldn’t look out of place in the Hamptons,with its soft sage green tongue and groove panelled roof.

This room now also gets east and west light, and on the days when you fancy a barbecue there is a small terrace, accessed via double doors, where the grill is situated by steps leading down to the garden.

For a house of this size the garden is small and north-facing although it will get east and western light but what it lacks in outdoor space the property offers by way of other add-ons, like a large detached garage big enough for four cars that could also be turned into a granny flat or au pair accommodation, subject to planning.

There is also off-street parking for as many cars again, all hidden behind electronic gates.

On the first floor there are three doubles. The main bedroom is to the front and has a shower and separate bath en suite that is also accessible from the landing.

The other two rooms have use of a large shower room on the return.

The property is seeking €2.4 million through DNG.