Noughties pleasure dome in a Sandymount castle for €2.5m 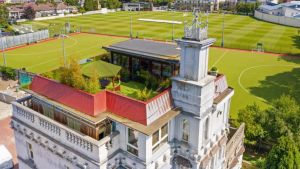 Who says the boom is over, baby? Cast your gaze over this south Dublin pleasure dome and get ready to party like it’s early 2008. This new listing features a three-storey penthouse so Celtic Tigeresque that the State could surely intervene to offer it protected status as one of the finest embodiments of the excesses of the early 2000s.

Holyrood Castle, a 19th-century castellated building improbably located on a cul-de-sac off Sandymount Avenue, in Dublin 4, was bought in 1999 by a developer who then converted the building into four apartments. Two of them – a three-bedroom basement apartment and a two-bedroom hall-floor apartment – were then sold, while the remaining upper apartments were purchased by the current owner, a developer also, who converted and extended them to create a triplex penthouse with a substantial roof garden.

The unique three-bed penthouse appears to have been designed entirely with entertainment in mind (and, judging by the button-upholstered leather walls, maybe some soft play activity too). It’s difficult to tell the reception rooms from the bedrooms. The main reception appears to be a pristine white chandelier-strewn bar; another – described as a bedroom – features swathes of red-velvet curtains, dripping chandeliers and a raised red area with mirrored ceiling.

A dramatic spiral staircase rises from here to a top-floor Jacuzzi room whose mosaic-tiled ceiling includes 14-carat gold-leaf detail; this leads out to a vast AstroTurf-clad rooftop garden complete with AstroTurf-covered gazebo, classical statuary and uninterrupted views across the YMCA playing fields next door. With a sauna area thrown in for good measure, it all adds up to quite the party palace.

The penthouse owner has since bought the two lower apartments (paying €425,000 for the two-bed hall-floor apartment in 2016).

The entire building is now on with the Sherry FitzGerald selling agent Christopher Bradley, seeking €2.5 million.

An adjoining building, known as East Wing, Holyrood Castle, has also recently gone on the market, seeking €925,000. Believed to have originally housed the billiards and service rooms of the main castle, it was separated from the main house decades ago, and East Wing was lived in by the same owner for more than 40 years. It’s possible that a potential buyer of Holyrood Castle may seek to reunite the two buildings.

Despite lots of attractive period features, particularly at hall and lower levels, it’s hard to see Holyrood Castle, this working as a single residence. The attraction is more likely to be its development potential as an apartment scheme, as the building is not listed, there’s plenty of parking (but limited gardens) and the location is fantastic. Mind you, it will be a shame to see that penthouse go. Never forget.