Me and my kitchen: Emma Forsyth, Pilates instructor 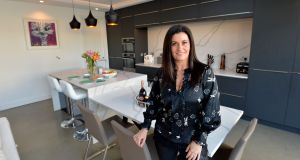 Pilates instructor Emma Forsyth lives with her partner, Warren, and five-year-old daughter, Maya, in a four-bedroom house in Dún Laoghaire.

It’s a new house, which they built on the site of their old home, and Forsyth, a keen cook and baker, was determined to have a bespoke kitchen.

“We bought the original house in 2015 because it had a large side and rear garden and we could build on the site,” she says. “ Warren is in construction and development and his company, CCPM (Collins Construction and Project Management), built the house. The planning process took longer than we expected, but the build was done well ahead of schedule so we moved in last October.

“Our previous kitchen was quite small and we really spent very little time there – other than cooking meals and breakfast time. So we wanted a larger kitchen which would be the focal point of the house – a welcoming space which would be quite modern in style. Together we came up with what we wanted and it was designed, sourced and built by CCPM.”

The couple chose grey cabinets, a polished concrete floor, and some white and grey quartz to “brighten it up” in the form of a table with artfully designed legs.

“We kept the table separate so we can move it about rather than having it attached to the island,” she says. “We added lots of lighting features and as much glass as possible along with art, photos and some colour and texture through furniture, accessories and flowers to make it warmer.

“We got as much customised built-in storage as we could because we all know how important storage is. And while we are still working on it, we just have a few bits to get for some of the wall spaces.” One feature they particularly like is the boiling water tap which, she says, they could not do without.

Emma, who is the founder of www.pilatesplusdublin.com, says all of the family are thrilled with their new house and the kitchen in particular.

“We are really delighted with it and are in our kitchen much more than we ever were before,” she says. “Before, we didn’t have that much counter space so baking and food prep was awkward. Maya loves baking so we now have great fun doing it and it’s such a super way to spend quality time with her. We hosted Christmas for the first time for 13 members of our families this year and the kitchen was perfect. It is so cosy and warm and even in the winter I love sitting looking out at the weather outside whilst we are so comfy inside.

“As Warren and I both run our own businesses and are quite busy, it is super to have a house we love to spend our time off in. I really am delighted with it and looking forward to adding bits as we go along.”