The owners of this Monkstown home needed a bigger, better kitchen. Architects Arigho Larmour Wheeler obliged with a clever design that includes a hidden playspace 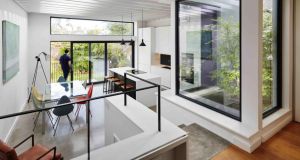 Dara Conlon will be the first to admit that when it comes to her impressive Monkstown home, it wasn’t quite love at first sight.

She and her husband Jonathan initially had their hearts set on purchasing property in Sandymount, but were lured to the viewing of a 1970s-built, mock Victorian, end-of-terrace further down the Dublin coastline.

“It was too small and had a tiny galley kitchen and conservatory, which weren’t appropriate for what we needed as a family,” she recalls. “That said, the huge garden was a big draw.”

The couple enlisted architect Mark Arigho of Dublin-based Arigho Larmour Wheeler Architects for a walk-through on their second viewing. Clocking the property’s vast potential, Arigho noted that what the pair perceived as the property’s main drawback – size – could be easily remedied with a ground-floor extension of fewer than 40 square metres; a project, crucially, that wouldn’t need planning permission (in the end, 36 square metres of living space was added).

Within five months, the tiny galley kitchen and north-facing conservatory were no more, and Arigho had delivered a light-filled extension that entirely changed the configuration of the property’s ground floor.

“Conservatories need to work with a certain orientation so this one was an absolute disaster, sucking all the heat out of the house,” notes Arigho. “If you have a nice big country house and want an orangery or something like that, a conservatory-type space would be great, but in terms of thermal control, they’re very difficult, and only ever suited to certain seasons.”

“The property was quite narrow, because of a sizeable 2 metre drop to the garden below, meant that originally, the garden was totally separated from the house,” explains Arigho. “The initial brief was that the family wanted a big kitchen/dining space at the centre of the house, and because the house was quite dark, they wanted more light into the house.”

The couple has two sons – Caspar (7) and Coen (4) – meaning that other requirements for the space soon found their way into the project.

“The family needed a play room for the kids, and utility room and cloak space,” notes Arigho.

The house may not have had the luxury of space on its side, but the end result is a highly clever use of space.

The plumbing of the original galley kitchen was retained to create a “secret” utility area in the entrance hallway, which now faces a sizeable cloakroom area; perfect. Both areas are hidden behind sliding panels in the hallway. It’s a somewhat unorthodox move, yet one that gives a streamlined feel to the house’s entrance.

A kitchen area with a north facing orientation isn’t without its challenges, yet in a bid to infuse more light into the kitchen/diner, Dara and Jonathan conceived of a “light well”, a glass courtyard at the end of the entrance hallway as it meets the kitchen area. It’s a feature that is visible in most areas of the ground floor.

Extra light comes courtesy of plenty of roof lighting as well as a roof light set above the kitchen roof joists: “It diffuses the light better as opposed to just looking up at a sheet of glass in the sky,” notes Arigho.

The 10-step drop to the garden was reduced to a much more workable 6-step drop, enabling Arigho to create a ground floor living space that is around 3.2 metres tall.

Yet it’s the “foldaway” playroom, situated in between the kitchen and sitting room, that offers an ingenious, flexible use of space. “It’s basically a disappearing corner with one big pivot door, then a bi-fold door that you can pull across to seal off the space,” notes Arigho.

Adds Dara: “It’s really useful. From a practical perspective, when we have friends over, and they have their kids over, that’s when the screens come into play. They are happy on their side and we are happy on ours. This set-up provides a great visual and noise barrier.”

Undertaking the final fit-out themselves, Arigho Larmour Wheeler designed a simple matt spray-painted white kitchen from JV Kitchens in Carlow. Among its features are blackboard-style splash-backs, Corian countertops and tongue and groove panels. Much of the space’s furniture was sourced at interior design/furniture store Lost Weekend in Dun Laoghaire.

“Leaving the beams exposed in the kitchen was Marks’ suggestion, and ended up becoming an unexpected pleasant surprise,” says Dara. “It adds character to what would otherwise be a more simple, rectangular space.”

The overall effect is an entirely modish and minimalist design: something of a novelty for its new owners.

“When Mark floated the idea of doing something very modern, I wasn’t necessarily sure how that would work,” admits Dara. “In any of the houses we’d lived in previously, our taste was always much more rustic and more eclectic.

“I did get a bit of a shock when I saw the space first, as we haven’t ever really been the kind of people to live in a super-modern space. But mentally we had reached a point where we needed almost visual order,” she adds.

“This was a huge departure for us in terms of a modern, sparse feel, but we were ready for a more clean landscape. And funnily enough, it’s easier to keep – it’s an incentive to keep everything orderly.”

Personal touches, from artwork to coloured furniture, helped Dara mentally reclaim the space and give it a more cosy, homely feel.

“It’s such a lovely modern space, and the character is brought in separately,” she explains. “If we want to change things up in the future, say moving from bright colours to something more monochrome, it should be easy to do.”

Dara and Jonathan bought the house early last year, and moved in in May for four months before the renovation project went underway in September.

“Spending time in the house in its previous form was a really beneficial exercise,” she says. “Moving out meant that the architect did all the site visits, which was invaluable to us.”

The family moved back into the renovated property in February, leaving them free to enjoy their new seaside home over what turned out to be a glorious summer.

“(The summer) felt like a brilliant welcome to Monkstown, and we were able to use the back garden for barbecues, drinks or playtime with the kids so many times,” says Dara. “It was a great first summer here for our family.”

‘I make myself small and stay quiet’: Experiences of racism in Ireland
9