Best in Class: Eight sofa shapes for all spaces 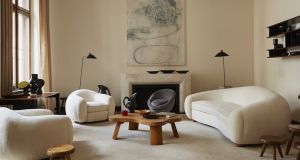 Consider all the senses when buying a sofa. The Touch: Spaces Designed for the Senses, is a thought-provoking new book from the publishers of the magazine Kinfolk, and Norm Architects. It demonstrates the importance of considering its namesake, along with sight, such as in this shot taken in the home of Berlin-based Emmanuel De Bayser, owner of a concept shop in the city called The Corner.

It features a Polar Bear-style sofa, an undulating curved couch conceived by Jean Royère that has a cult following with everyone from Kanye West to Jennifer Aniston and Ellen DeGeneres. Paris dealer Patrick Seguin sold a set: a sofa and a pair of armchairs for US$1million a couple of years back while its auction record is $754,000 at Phillips New York in 2016. Above the fireplace is an abstract piece Aqua Lido by XOOOOX.

For something nearer to home and less stratospheric in price, check out the curves of a large sectional version by American designer Milo Baughman at Lusk-based Mid-Century Online.

It’s one of the big-ticket buys of any home so make sure you select something with the right personality for your space. Buying something that has a fashion-forward sensibility or reprising a yet-to-be rediscovered 20th-century decade are smart moves as it will add longevity. And since we’ve mined the mid-century 1960s and 1970s to death it is now the turn of the 1980s to be fixed in fashion’s fickle gaze.

The Memphis movement is trending and at Roche Bobois the French furniture firm has searched its archive to bring the curved form of the 1981 Informel sofa back into our living rooms. Designed by Hans Hopfer, who was also behind its Mah Jong seating arrangement, it has been given a 21st-century upgrade which includes a new comfort spec. While not on display in the Sandyford showroom it can ordered and costs €3,030. The Rocket poufs, also pictured, cost €850 each; roche-bobois.com

If creature comforts are paramount over looks then the Essential sofa, designed by Francesco Binfarè and debuted at the 2016 Milan Furniture Fair, may be just what you’re looking for. Its pliable cushions seem to mould to your form and the headrest can be moved up and down to suit both tall and small.

Pictured in a plush velvet finish it costs €12,210 from Minima, for each of the pair pictured, with one mirror imaging the other. minimahome.com

An element of cool

Soho Home x Anthropologie is a creative collaboration between Soho House, – one of the best-known members club groups in the world that knows a thing or two about seating ranges that will rivet a-listers to their seats – and the high street homewards and fashion chain.

It takes inspiration from 40 Greek Street, Soho House’s original location, as well as the more recently opened Barcelona Soho House and the collection features over 30 cool pieces. Pictured is the Adriana sofa, which costs about €2,725, ex delivery. anthropologie.eu

This traditional-style conversation seat, in a four-leaf clover shape, is a sofa that demands to be the centre of attention. The cognac leather and deep buttoning detail of the Borne will work well in a large hallway, reception room or even a large dressing room. It costs about €3,315, ex delivery, from UK-based Rockett St George. The same online store sells a black leather loveseat with moveable and interchangeable seats. It costs about €2,697, ex delivery. rockettstgeorge.co.uk

Reupholstering an existing sofa or a vintage piece that you find at a fair or online is another way to completely refresh your living room. It’s also a far greener way to redecorate rather than committing it to landfill. Larsen fabrics’ new range includes smokey blues and greys in simple prints that feel quite timeless. Foster in smoke, €144 per metre, is pictured on the wingback sofa to the right of the shot while the curtains feature Vitelli in charcoal, €112 per m and Bautista, €132per m, in charcoal. On the mid-century style sofa to the left is Sasaki in pearl, €138per m. All are available to order from Ventura Design’s showrooms, in Blanchardstown and Deansgrange as well as other stockists. larsenfabrics.com; ventura.ie

Two is better than one

The three-piece suite has fallen from favour in many homes where the preference is for two sofas instead. These are usually set up opposite each other but another way to work such seating, especially in a long rectangular room is to set the sofas up on the same wall with something to break up the room, like this gold and metal Tibo mirror, €155. Pictured are Capsule three-seat sofas, reduced from €1,099 to €649 each, set upon a Riley rug, €100, all from Harvey Norman. harveynorman.ie

London-based Brady Williams, where one half of the design team is Irish, supplies super luxe curved sofas as part of its core range. Its Highclere, prices start from about €10,975, has a stepped back and shallow tufted buttons while its sister design, Howard, pictured, from about €11,020, offers a more streamlined version of the same shape. Both are available in a wide selection of fabrics and metal finishes and prices are ex delivery. bradywilliams.com

I watched my dad’s funeral by webcam from France
9

Life with mortgage arrears in Ireland: I had ‘seizures from stress’
Real news has value SUBSCRIBE