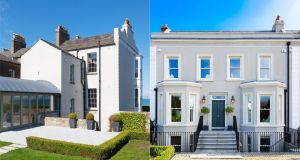 1 Idrone Terrace, in Blackrock in Co Dublin, and 17 Vernon Avenue in Clontarf, in north Dublin

When Ormond Hall, a lavish mid-terrace home at 17 Vernon Avenue in Clontarf, hit the market in April seeking €3.25 million, it was the second most expensive home on the market in north Dublin.

The house was bought in 2011 by a Canadian couple, Connor and Amanda Doyle, for just €670,000; they reportedly poured a further €1.5 million into its upgrade, bringing their total investment to nearly €2.2 million.

You could be forgiven for expecting that the 492sq m (5,295sq ft) house might, like many houses currently in the multimillion-euro price bracket, stay on the market for a long time.

But the Clontarf home sold three months later, in July, for €3.575 million, 10 per cent over the asking price, to a local technology millionaire, Ronan Rooney. It’s a coup for the selling agent, Karen Mulvaney of Coldwell Banker.

Rooney, the former co-owner of Cúram Software, which was sold to IBM in 2011, was behind one of the other most expensive home purchases of recent years on Dublin’s northside when he acquired Long Acre, on Thormanby Road, for €2.55 million in 2015.

Rooney earmarked that house, sitting on 3ac, for demolition and sought to replace it with a larger home extending to some 1,100sq m (11,850sq ft). Those plans may now be parked indefinitely if the businessman plans to settle in his pricey Clontarf pad.

The house was acquired in 2010 during the recession for €1.2 million, with an additional €1.3 million reportedly spent on its extension and renovation.

It sold for €2.95 million in June, equating to 11 per cent over the asking price. It’s good news for the vendor, Google’s managing director for the UK and Ireland, Ronan Harris.