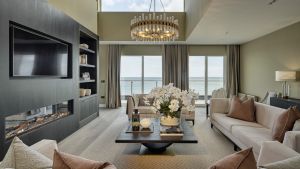 Boats en route to Dublin Bay are just about the only distractions on the horizon from the newly launched apartments at Marina Village in Greystones.

Taking in vistas of Bray Head, across to Dalkey Island and Howth, there is an expanse of sea that you don’t quite get from many properties in Dublin Bay itself.

What are of interest though, are lobster pot buoys, bobbing up and down on the sea side of the marine wall. It’s the sort of place where you could get to know your local fishermen, pick up fish as fresh as it can get, and it will be on the pan within the hour.

Back as far as 1795, Greystones was recorded in Topographia Hibernica “as a noted place for fishing”, with 200 boats operating in 1800. But by 1834, what was then a sleepy village had but seven fishing families.

Granted town status as late as 1984, Greystones has had its fair share of controversy when it comes to the town and the sea that hems its coastline.

In 1885, parliamentary questions were raised by Irish MPs in Westminster as to when a new pier for the then village would materialise. Later in 1905, a local meeting on the rocks pleaded with the Government to intervene with its unfinished harbour.

The near-completed regeneration of Greystones Marina, which is the State’s largest marine construction since Dún Laoghaire pier in Victorian times, has been a long and controversial process.

When the public-private partnership between Wicklow County Council, Sisk and Park Developments announced its plans in 2006, the project attracted 9,000 objections.

Even as late as July 2019, a proposed protest by a flotilla of trawler fishermen, to object to the lack of landing sites for their vessels, was planned. It now appears that all sides are in discussion to find a solution.

The town gained popularity as a seaside resort in the mid-1800s, and with the advent of the railway, the place became a second home in summer months for the well-heeled from Dublin. Many Victorian houses were idle in winter months, but during the summer men in tuxedos and women in full evening dress strolled arm in arm along the seafront.

Today it couldn’t be more different in terms of dress code; it is unlikely you will pass anyone in a suit not to mention evening attire, such is the relaxed nature of the town, which was voted the world’s “most liveable community” at the LivCom Awards in China in 2008.

Today it’s all about yoga and spandex on the North Beach, which the new Glenveagh apartments at Marina Village overlook. The daily “swimrise” dip, organised by local eaterie The Happy Pear, sees both locals and tourists take to the sea as the sun peeks its head over the horizon each morning.

The Marina Village development, designed by O’Mahony Pike, comprises 205 apartments and 145 houses (109 of the houses and 16 apartments have already sold), and includes a 250-berth marina, and a park at the base of the cliff walk from Bray.

The current launch, in terms of sea views, is dramatic, as are interiors by Ventura Design in the show units. Those on the corner site facing the North Beach have bedrooms with such fine views, you would never want to close the curtains, never mind get out of bed. They also look seaward to the front, and the wraparound windows make the most of the coastline vistas.

But it is the penthouse on this block that will generate most chatter. It is a one-off in the development, and was initially destined to be two apartments.

Extending to 232sq m (2,500sq ft) plus terraces, ceilings are extra tall to maximise the light, and the principal suite, one of three bedrooms, is the same size as a standard one-bedroom apartment.

All of the rooms open out to the terrace which wraps the entire way around its L-shaped layout. There is a further room, which is laid out as an informal living space, which could be used as a further bedroom but, to be honest, at this height, this is not a space for children.

The two-bedroom apartments in the centre of the block, though not having the dramatic views of the corner units, still have great views through an entire glass wall to the front.

Each unit has a parking space – the penthouses have two – in the underground car park, with ample visitor parking to the front.

The marina is now in full swing with a new clubhouse and berthing for 250 pleasure boats, and retail and restaurant units will be launched in the final phase of apartments which will also have sea and marina views.

Here’s hoping that the fishermen’s efforts to gain access to the new harbour will succeed, continuing a tradition since the 1700s, giving locals access to daily fresh fish from the boats.

Support bubbles: Everything you need to know
9