When the owners of a rundown house in Glasnevin looked to extend, they asked family to help 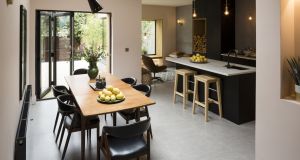 Husband and wife design team Genevieve McGill and Phil McMahon run Foreign Bear, a design studio in Hackney, London that focuses on contemporary interiors. When Genevieve’s sister Olivia bought a run-down house in Glasnevin with her husband Anthony, the couple asked Foreign Bear to take on the job of refurbishing it. The result was a sisterly symphony, and the project was finished in record time.

The McGill sisters come from Falcarragh in the Donegal Gaeltacht, where their father was the local doctor Lochlann McGill, a native Irish speaker who would converse as Gaeilge with all his patients.

Like most Tirconnell natives they spent their college and early working years elsewhere. Genevieve went to Dún Laoghaire School of Art and Design where, while out at an art exhibition opening two weeks before she was heading off travelling for a year, she met her future husband Phil, a Dubliner. The NCAD student was so smitten by her that he ended up travelling out to Jakarta to join her on her year out.

“We got to know each other intensely and quite quickly,” she laughs.

They had both independently applied to continue their studies at Central St Martins where they studied scenography. Later they set up their interior architecture practice Foreign Bear Studio in the UK capital.

Older sister Olivia, who had known her future husband Anthony, another Falcarragh native and a civil engineer, since she was 18, although it was almost another decade before the couple got together properly. They lived in Qatar and London before making the decision to come home before their eldest son Luca started primary school.

They came across their Georgian property in Glasnevin, Dublin 11. The dilapidated house was divided into five bedsits and needed a serious rethink.

“There was nothing to salvage,” Genevieve recalls, on first seeing the house.

She suggested a two-storey extension, adding a bedroom and bathroom upstairs and giving them a proper sit-in kitchen to the rear where an oriel window – a floating form of box bay – complete with deep corner window seat, knitted the outside and inside together. A row of bamboo planted outside the window now washes the vista in a green hue.

“We spent several months getting it right on paper first so that every line matches up, drawing exacting plans and changing them to create a real sense of cohesion and give a best use of space. Lighting schemes were run concurrently with the design phase. The end result may feel simple but belies the time, effort and thought that went into the project.”

Genevieve and Phil have a son Land, now three, so they understand the needs of a family home. Just before Christmas, Olivia and Anthony welcomed their second son Xander to the clan so already they’re growing into the house.

What was it like having her older sister as the client? It was discussed in twice daily communications, she explains. “We’re very close. We always have been.”

The work took 10 months, progressed by the fact that the family was renting nearby and could keep an eye on the build. The fact that another Donegal native, Padraig McFaddan, of Aisling Construction was the contractor, also kept things moving.

And what is it like for a husband and wife to work together? “In the beginning we were trying to design things together and it didn’t work at all. There was friction but we’re together 18 years and the business is in its ninth year so we’ve worked out separate roles. Phil is on site a lot and I run the design studio. We’re not sitting on top of each other, which is a good thing. At home we’re quite boundaried. We don’t talk about work after a certain time.”

In Glasnevin, the kitchen, with its quartz worktops by Granite Tops, was inspired by Errigal mountain, the steepest and highest of the seven sisters within the Derryveagh mountain range, a landmark of the landscape of the north-west Gaeltacht. The MDF units were fabricated by Aloco Kitchens, a small firm based in Santry, Co Dublin, and include a sizeable pantry made of the same material.

Concrete tiles are underfoot, with a deliberately textural concrete screed on the splashback wall and family room area. The ambiance has been created by warm use of wood, with the concrete.

Lighting and natural light were other considerations. There is a large roof light over the dining table, and off-the-shelf bi-fold patio doors help to draw light into the back. Elsewhere the contractor built timber window frames and Foreign Bear Studio ordered custom glazing panels to fit these exactly. There is an eaves window, a clever fenestration that runs the height of a bedroom wall upstairs and extends up onto the roof in an L-shape to draw light in from two different angles.

Brass scones, a wall-affixed piece over the dining table, and vintage pieces from a thrift shop in London all add warmth.

The firm dressed the house for these pictures, using cushions and a rug from Helen James Considered range for Dunnes Stores.

In the living room there is a tan leather sofa and gorgeous occasion chair, both rented from Historical Interiors, over which hangs a South African wedding mask, a souvenir from a trip to the Mzansi state. Historical Interiors’ sister companies Mid Century Online and The Vintage Hub sells a wide range of similar seating.

In the family bathroom the green hexagonal tiles were sourced from Best Tile Ireland. Brass sconces were found at Criterion Auctions, eons ago and Olivia has been waiting a couple of years to get them electrified. She also found some of her lighting on the Etsy shop Rara Forma.

The house looks good but ultimately is a family home. What we most love about it is the peacefulness and natural light, Olivia says.

“Saibhríonn an solas nádúrtha agus an suaimhneas an t-am a chaitheann muid sa spás seo,” which translated from the local Donegal Irish it means: “The natural light and peace enrich the time we spend in this space.”

‘In Ireland I’ve found another form of persecution’
3

Protein powders: What are they and do they work?
Real news has value SUBSCRIBE