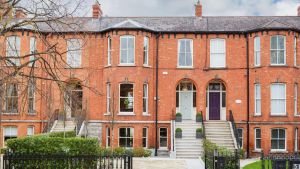 A Dublin 6 house purchased in 2013 for €1.5 million has been redecorated in the intervening period and is back on the market seeking an additional €1 million. Number 52 Palmerston Road in Rathmines is a classic mid-terrace Victorian redbrick with original period features revamped in keeping with modern tastes. A lot of work has been done since the 390sq m (4,198sq ft) five-bed was originally refurbished and extended in the early noughties: it is in walk-in condition and is for sale through Sherry FitzGerald for €2.595 million.

Steep granite steps lead to the front door of number 52: it has leaded side panels and opens into a front hall floored with stone tiles. It has rich ceiling cornicing and, like most of the hall upstairs and down and the two main reception rooms, panelled walls. The high-ceilinged interconnecting rooms open off the left of the hall: both have dark walnut floors and matching white marble fireplaces.

The front drawingroom is painted pale grey, with elaborate ceiling cornicing and picture rails painted white; it’s a bright room with a tall bay window. The interconnecting dining room/study at the back is painted a more dramatic black/navy. Often formal rooms like these in Victorian houses are little used, but that’s not so in this house: there’s a TV in the front reception room, a desk and piano in the back room – and a well-equipped butler’s pantry concealed at the back of the room. It’s really a modern bar, with a sink, fridge and shelving for drinks.

A few steps at the end of the hall lead down to a landing with toilet and a double bedroom with a timber floor on the return. More steps lead down to the garden level, which has been given a very modern makeover: a large family room has, like the drawing room above it, a bay sash window, a polished oak floor and a marble fireplace with a Chesney wood burning stove.

Other accommodation downstairs includes a large utility room off the dining room, a gym with a little-used sauna and a toilet. There’s understairs access from the front garden into the bright downstairs hall.

Upstairs, there’s a good-sized dual aspect double bedroom with an en suite shower room on the first return, with views of the spire of nearby Mageough retirement complex. There are three more bedrooms on the first floor: the main bedroom has a large bay window matching the ones below and a smart en suite shower.

The other two bedrooms – one a girl’s, one a boy’s – are both doubles. A large family bathroom has part subway-tiled walls, shower and free-standing bath. A small room up a few stairs at the very top of the house is used for storage.

There’s room to park two or three cars in the gravelled front garden. There’s also access to the back garden from a lane at the rear. The relatively small back garden is neatly laid out in lawn with three granite patios, one near the house and two smaller ones at the end of the lawn.

Number 52 Palmerston Road is between Windsor and Cowper roads and is very close to the Cowper Luas stop.