Park Lodge extends to 365sq m and stands on 0.4ac, backing on to Willow Park School 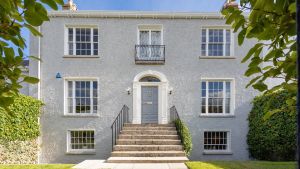 To fully appreciate this Georgian gem on Booterstown Avenue in south Dublin, you need to stand in the rear garden, as it is only then that the size of the property dating from 1820 becomes apparent.

From the front, the house is hidden behind a high evergreen hedge, which acts as both a sound barrier and privacy wall, though at no stage is the internal light in the property compromised.

The facade gives the impression that this is a modest home, though nothing could be further from the truth. With a typical double-fronted Georgian layout, one of the key benefits of the house, besides its size, and all reception rooms being dual aspect, is the mews which is connected to the main house via a corridor.

Over the years it has had many incarnations, from a guest wing, family offices, to a granny flat for older relatives. It currently accommodates the next generation of family members who are about to fly the coop. It offers a couple of options for new owners, who may want to lease out the mews as a two/three-bed unit or indeed amalgamate it into the main house for additional bedrooms.

In its heyday Park Lodge, extending to 365sq m/3,950sq ft (including mews), was part of Willow Park – now the junior school for Blackrock College. “The kids would leave the house at five to nine in the mornings – to get to school for nine,” says the owner, who is downsizing. St Andrew’s College is just across the road, and the property backs on to the games pitches of Willow Park School.  “Then when the kids were at college they took the Dart [a 10-minute walk] to Trinity or the bus at the top of the road to UCD.”

Ronan O’Hara of Sherry FitzGerald, who is handling the sale, says: “Besides its understated elegance, it is the location of the house that will really appeal to buyers, as many parents spend their time ferrying children not only to school, but also to after-school activities. Here they can walk to school, and with four sailing clubs a short Dart journey away, and a tennis club close by, the location is second to none for a family.”

The property has two large reception rooms flanking each side of the hallway; a dining and drawing room, both of which are dual aspect, and due to their orientation are bathed with light throughout the day. Both rooms retain their original Carrera marble fireplaces.

At garden level is an informal living area which opens out on to the gardens, and a kitchen. The plans for the kitchen are framed and hang in the hallway, because they caused quite a stir when the room was completed 30 years ago. Designed by Prof James Horan, the former head of Dublin School of Architecture, the design was considered so avant-garde for the time it featured in many architectural publications.

Four fine-sized bedrooms are arranged upstairs off a wide hallway which features a remarkable constitution window – again flooding the space with light.

The southeasterly-facing gardens are what will really appeal to both families and gardeners. Lying on 0.4 of an acre, secret pockets are hidden off a large central lawn. A kitchen garden with walls laden with old Chinese wisteria, lies behind tall evergreens and is accessed through a walkway of pergolas swathed in climbing roses.

Here neat box hedging frames vegetable and fruit patches along a walkway of mature fruit trees. In addition there are two outhouses to store all the tools required to maintain the herbaceous borders, lawns and kitchen garden.

The elegant family home, in turnkey condition, is on the market through Sherry FitzGerald with an asking price of €2.55million.