A dialogue of design in Milan

The Salone Internazionale del Mobile is the world’s biggest and most important furniture and home design fair, with big names to meet, innovations to explore and side projects that dazzle 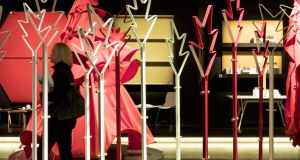 The Milan furniture fair, Salone Internazionale del Mobile, the biggest and most important in the world, is not for the faint-hearted. It was bigger than ever this year, overwhelming the city and attracting nearly half a million people from more than 160 countries. Since its inception in 1961 it has established Milan’s supremacy in innovative design internationally, exerting huge influence and power. It takes place at several levels: in the Fiera Milano, the main 1300-acre convention centre, a 40-minute metro ride from the centre of Milan (going there is like heading to an airport with crowds of seasoned visitors dragging wheelie bags), and in Fuorisalone with hundreds of events in the city itself.

One of the most important figures in Milan, celebrated for her taste, her mid-century gems, her championing of young designers and her prices, is Nina Yashar, the Iranian-born owner of the design gallery Nilufar. Known as the Queen of Design, she sets trends and has become famous for her bold, visionary choices and the way she mixes vintage pieces with contemporary ones from all over the world in interesting ways. To be selected for her gallery in the fashionable Via Spiga is a like a regal imprimatur, a game-changer for many young designers.

“More and more collectors want unique one-off pieces and these collectors are like Renaissance patrons,” she says. Her best sellers are pieces from the renowned Italian architect and designer Gio Ponti, which fetch stratospheric prices.

This season she opened the Nilufar Depot, a three-storey industrial warehouse to showcase her choices for Salone; among them was the Milan-based Irish designer Nuala Goodman whose experimental flocked textiles Flower Power attracted Yashar’s keen eye alongside vintage rugs, historical tapestries, furnishings made with bronze planks, a chandelier inspired by sundials and low tables by the increasingly fashionable London-based Italian furniture maker Martino Gamper.

Another must-see venue for the cognoscenti is the gallery of Rossana Orlandi in a converted tie factory, an intricate warren of rooms containing vintage pieces alongside those from up and coming designers, with a garden cafe and a vast shop where one could spend ages browsing – or buying. The evening we visited, each room had unusual and interesting sculptures, furniture, textiles and extraordinary lighting systems including one with suspended tulip-shaped modules in shiny titanium and a floor-to-ceiling arrangement of luminous cogwheels like oversized watch components by Moritz Waldemeyer for Panerai, called Cog.

The main convention centre contains massive pavilions housing corporate showrooms dedicated to furniture, furnishings, an international bathroom exhibition and another on kitchens and kitchen technology. For architects, interior architects and designers, it’s an opportunity to explore and hear about new developments, such as water and energy conservation or lighting systems. 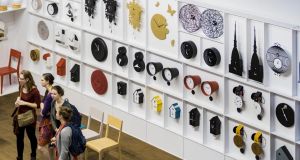 She also noted another significant trend, towards one-off or limited edition interior decorating elements, citing Nilufar and numerous other producers.

“We are talking about specially designed pieces to fit into a particular setting such as custom-sized light, art furniture and refurbished vintage pieces in contemporary eclectic fabrics and colours.” And brass, she concludes, is definitely the new material for 2016 as well as metallics like copper and silver. “Colours are strong in vintage pieces, but all the big players in the fair, from Cassina to Molteni, Vitra and others, rely heavily on a very neutral palette of beige, grey tones, darks and lights.”

Salone Satellite, a bright, open space showcasing the work of 99 young emerging designers from all around the world, had two Irish exhibitors, Orla Reynolds from Dublin with her award- winning modular bookcase, “As If From Nowhere” and, making his debut at Salone, London-based Roscommon man David Beirne.

Reynolds’s bookcase unit, from which a table and chairs are withdrawn ingeniously, is now being manufactured in Slovenia, “and we are being sought out by architects for specific projects and selling in container-loads all around the world,” said her father, Dermot, who was helping out by demonstrating the system to intrigued observers.

Beirne is a graduate of Letterfrack and set up Bright Potato with his partner Diego Martinez three years ago. They showed aluminium and brass pendant lights, “Papillon”, a quirky urban plant pot, “Mangle”, and flatpack chairs and stools, “Peg”.

Outside Salone, the events surrounding it in the city are becoming almost as important as the main fair, and fashion designers are increasingly capitalising on this popularity, with companies like Cos, Nike, Hermès, Loewe and Fendi getting in on the act and creating exciting and compelling installations. There were long queues everywhere – to see exhibitions by Ron Arad, by Dutch designers in the Palazzo Francesco Turati with 50,000 tulips in the courtyard, in the Fornasetti showroom and to a venue where a selection of failed products and prototypes that never made it into production, many from famous designers, were highlighted.

On the last day of Milan Design Week I went to the Triennale design and art museum in Parco Sempione for a fascinating exhibition on interior architecture. The first part contained photographs of rooms designed by 50 famous Italian architects and interior designers from the 1920s to the present day, chosen from their personal archives – everything from those designed by Gio Ponti and Ettore Sottsass to contemporary flexible and low-cost rooms by Fuga Officina in 2015. You walk through a series of rooms, each designed by a different contemporary architect illustrating their living concepts and philosophies.

How the digital revolution transforms the home was the theme of one room; another was a minimalist habitation cell in birch while one called Ursus connected with the Scandinavian world of mythology and travel with every single part inhabitable. “If craftsmanship is to survive, it must be clear that the machine exists to serve man and not vice versa” was the statement accompanying it by the designer Duilio Forte.

“It is a time when working designers and architects like me can see and hear what is being produced by those who have more time than we do, ie the students) and those who have more money than we do, ie the corporations. Most of us have neither enough time to be as creative as we would like, nor enough money to be as reckless as we would like, so this is a good place to dream, even if only for a few days.”