Independent agent strikes out in the heart of Dublin 4 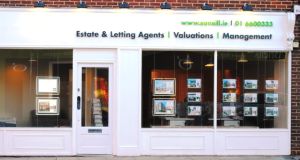 In recent months we’ve seen a number of the bigger estate agents set up shop in new locales around the capital, upping the competitive ante and a sign surely that the industry is back in business.

But with so little housing stock to draw from it’s a calculated gamble. Credit then where it’s due to lone operators also staking their claim to the spoils in a very finite market. Anyone passing through Donnybrook recently will have noted the bright livery of Eoin O’Neill’s new agency shopfront beside the Garda Station on main street. O’Neill will be well known to many in the industry having worked for 12 years until 2011 as a director at Sherry FitzGerald New Homes before striking out on his own. Prior to that he spent 12 years at the Ross McParland estate agency in Donnybrook.

Last year O’Neill and Drohan Lettings – another independent operator – joined forces to extend their offering. This new office in the heart of Dublin 4 marks an ambitious new departure, and now that it’s there it seems almost surprising it took so long for an agent to stake a claim along such a prominent strip.

We emotionally reticent Irishmen would be even worse without sport
4

A play about sex work: ‘I want people to come out of the theatre angry’
8

Maureen Gaffney: Why and how do we fall in love?
10