If you’re building it, they will come: Ireland’s new architects 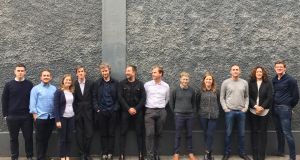 Over the past decade something remarkable happened in Ireland’s architectural profession. As the recession hit hard, one-third of architectural firms laid off between 61 per cent and 100 per cent of their staff. By 2014 the market for architects had dropped a staggering 77 per cent, and the number of practices had fallen from 1,027 in 2012 to 752.

One day, architects were designing high-profile projects with eye-watering budgets; the next, they were queuing for State benefits. The recession took, but it also gave. As practices closed their doors, a number of young architects emerged who have gone on to define a new movement of modern Irish architecture.

Founded in 2007 and nominated in 2013 for the prestigious Mies van der Rohe prize, Steve Larkin Architects specialises in contemporary Irish domestic architecture. The primary influence for Larkin’s work is unusual: “traditional Irish musicians”. But the more we talk, the more I begin to understand what Larkin, an accomplished fiddle player, means. “Musicians work hard to develop a cultural sensibility alongside individual sensibility. They practice in particular cultural landscapes which enrich their music-making.”

Composing architecture is a collaborative exercise – with other architects such as TAKA and Clancy Moore, with whom he shares office space, but also with clients. At the centre of the design process are “the clients’ interests and personalities, so that the space created is unique”. But there is also an important collaboration with the Irish landscape, creating architecture that “shows the local hands that made it”. This approach can be seen in the house the company designed at Bog West, Co Wexford. A beautiful, modern farmhouse, composed from a simple, local palette of materials; playing with light, form and mass, it sits in the rural landscape with an unexpected comfort and ease.

Currently working on: a new build in Co. Carlow and a garden house in Dublin.

“All you can do as architects is make sure that you are getting into the heart of a conversation,” says Andrew Clancy of Clancy Moore. His practice began that conversation, as the recession was beginning in 2007, by designing what would become a beautiful pair of houses nestled into an existing Co Wicklow quarry. In 2012, House Slievebawnogue won the prestigious AAI Downes Medal for Excellence in Architecture.

Our projects “start with a conversation, with the client, about what is special about a place”, says Clancy, showing me numerous models for a house and gallery they are designing inside an existing agricultural structure in Somerset, England. This tactile approach is an important part of the design process – something that clients can understand. “We part company with any architect who makes themselves difficult to understand.”

Pointing, on the model, to a piece of seemingly mundane concrete structure, Clancy explains how something like this tells a story about the building and becomes a departure point around which the rest of the design is developed. “We find that the general attitude to a project is in the specifics of a detail.”

“We talk to our clients about things they probably wouldn’t talk to their mother about.” Alice Casey and Cian Deegan, who founded TAKA in 2007, get into the “nitty-gritty” of their clients’ lives “in search of the poetic”. Understanding how the client lives; why they want two sinks in their bathroom; how they inhabit spaces, boil the kettle or watch television is as important as the position of windows or the colour of walls.

The poetic nature of their work is evident in the subtle refurbishment of an existing mews house on Waterloo Lane, Donnybrook in Dublin. Replacing a garage door with a window and planted screen brings the house back into conversation with a street that it previously turned its back on.

The client is central to the design process. “We bring them into a conversation and try to keep that conversation open for as long as possible.” While their work is highly responsive to individual client needs, throughout the design process they “never give a client options”. When you do, “you don’t get their opinion on one thing, they are constantly looking at the two things together.” TAKA give new clients one idea. This is the “beginning of the conversation – by the end of the conversation it’s never the same.” For them, architecture is “as much about the process as it is the finished product”.

Currently working on: An education centre for the Le Cheile Schools Trust in Templeouge, Dublin; An extension to a gate lodge to Middleton Park House in Co. Westmeath;

Amid the scarcity of the recession years, Kathryn Wilson and Shane Cotter founded Architectural Farm. By 2014 Wallpaper* magazine had named them one of the top 20 best young architectural talents in the world. Working with simple palettes of materials, they breathe new life into ordinary Irish suburban houses.

The beautiful simplicity of their architecture is evident at their “walled garden house” in Dublin 4. Responding to the historic stone boundary wall of the adjacent Beggars Bush barracks and focused around their client’s love for gardening, the single-storey extension reaches out into the garden, inviting it to engage with the new living space. Glazed openings puncturing the roof catch “glimpses of the rising sun above the existing rooftops while also revealing the depth of the structure above”. The finished product is elegant.

Midway through a sentence, Gavin McMahon jumps up from his seat and points out of the studio window at a small patch of land. MMAS, founded by Gavin and Fearghal Murray in 2013, are a passionate and energetic young practice based in Belfast. “Today, somebody is mowing the lawn but when they leave they are going to lock the gate. There’s not even that trust in the residents to give them the land; we fence it off, protect it from them.” A core value for them is how architecture responds to social needs. Current projects include a community farm in west Belfast.

What is striking about MMAS’s approach is how they see their clients as co-designers rather than customers. “We try and take clients on a journey. With most of our projects our clients feel that they have designed it as much as we have.” We’re about “quality of life, relationships, and about general demeanour and peace of mind, working with people to understand what wider value we can bring to a project. We try on a wider level to enhance the quality of everyday life for the users of whatever we are working on.” Currently working on: a yoga studio and pottery workshop and an urban farm.

Other practices such as Carson & Crushell (carsonandcrushell.com), working with simple materials and a lightness of touch, are creating beautiful domestic projects - they are currently working on projects that include an extension to a protection structure in D6, a scout hall in Co Wicklow and an artist’s studio and house, also in Wicklow.

At a larger scale ODOS, now based in London and New York as well as Dublin, employ innovative working practices, allowing the client into their offices to become part of the design team. (odosarchitects.com) . Current projects include two new hotels in Dublin; a new student residential development near Smithfield; and a five-storey private members bar in New York.