Our neighbour’s dog barks outside all weekend. What can be done? 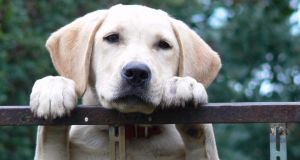 Q We have a boundary wall with the back of a large estate. The house that borders most of our property has a small dog that they leave outside to bark most weekend evenings. Generally the barking starts at 6pm and will not cease until past 11pm. We have been unable to use the back garden during the summer because of the noise.

It is loud and very, very ‘yappy’. The owners seem oblivious to it, though they mentioned it when we first moved in a few months back. What can be done?

A I would encourage you to approach your neighbours, talk to them about the issue and give them an opportunity to address it. While they have mentioned the barking to you previously, perhaps they don’t fully realise the disruption it is causing to your lifestyle.

Though you may wish to avoid confrontation, if you approach them with your complaint in a friendly and open manner, the issue could be resolved quite quickly.

The first option would be for your neighbours to keep their dog indoors in the evening at the weekend. If that is not an option for them, the most ethical approach to deal with barking is to get a qualified professional dog trainer to work with them and their pet.

To solve the problem, they must first find out what is causing it. Dogs bark for many reasons the most common being frustration, boredom, separation anxiety, attention-seeking or fear.

Once it has been determined why the dog is barking, a suitable training protocol can be put in place. If all attempts to solve the dog barking in an amicable manner fail, you have two further options.

You can contact the local authority dog warden who can call to your neighbour to explain the complaint, the remedies in law and complete a license check for their dog. Alternatively, you can write a letter of complaint to the district court and request a date for a hearing.

If this is the option you decide to pursue, it is advisable to have video footage and a record of dates and times of the disturbances. You must inform the dog owner of your complaint by using the form prescribed for this purpose under Section 25 of the control of Dogs Act 1985 which is available from the district court office and your local authority office.

The court can make an order that requires the occupier of the house where the dog is kept, to stop the excessive barking by exercising due control over the dog.