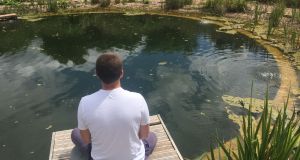 I’m not a spiritual person, but there has to be more to existence than running around like an over-stimulated baby monkey in the name of being busy.

As wonderful as friends are, as tantalising as travel, work, reading, sex and music can be, I decided to explore a week without the deleterious effects of social and anti-social media – or other people.

And so I take a train to the back-arse of the English countryside, stopping to panic-buy books, drawing pads and Jaffa cakes, before the bus to a solitary hut near Vajrasana Retreat Centre, a Buddhist haven, in deepest Suffolk.

I would say you’re left to your own devices, but these, too, are deposited in a safe with Saddhaketu, a Hibernophile Buddhist from Mexico. The prospect of a first experience of solitude, one moreover with no contact with the outside world, is nerve-wracking.

You see a male blackbird ducking low across the grass, apart from wondering if he’d like some ladybird salad for a change

And then, 11 hours’ sleep later, the morning comes and you realise you’ve been on your own for work trips before and it’s not that big a deal.

Memories come unbidden, and also gratitude, that strange confluence of thought and emotion, arises for the kindness of friends and other strangers. And you meditate for about an hour. And then you try and do nothing in the armchair by the window.

And yet you can’t do nothing for very long.

So you finish Bill Bryson and move on to the new Sally Rooney book and the Rainbow Road, about an English chap who deserts the British army at war’s end and wanders India as a freelance ascetic, before returning to set up the Triratna Buddhist Order in London’s swinging sixties.

The world is alive

And you go for a walk to the 10-acre wood, and the world is alive: rabbits, birds, insects and some terribly nonchalant deer.

And you enjoy tea like it’s the only thing that exists.

And then you realise there are quite a lot of ladybirds in the hut all of a sudden: a few dozen all told. And it’s like you’ve been unconsciously looking for a problem to solve, and here it is.

And thus begins the Ladybird Relocation Project, and you realise they’re just like other insects but with a nice coat and a good publicist.

And you ponder the ridiculousness of everyone perceiving themselves as the centre of their own universe, and realise that if it wasn’t the ladybirds, you’d probably have found something else to be annoyed at.

You see a male blackbird ducking low across the grass, apart from wondering if he’d like some ladybird salad for a change, you think of St Kevin in his cave above the Upper Lake and the blackbird nesting on his arm and everything being imagined anyway, including the poet, and no less real for that.

You become aware of the body, of its pleasant, painful and neutral sensations, of the thoughts and emotions bound up there

And you read A Yogi’s Joy, an account of the 12th-century hermit Milarepa, who went from actual murder to Awakening in one lifetime, and sang his Hundred Thousands Songs in Tibet in a cave while in the nip.

And you walk up the hills for an hour and cross the field of rutting rams and find an old house where they keep llamas and you wonder whether the extra ‘l’ is a sort of in-joke.

And occasionally a thought flickers in the twilight that you should feel lonely, and then people come to mind and it fades and you move on.

And the weather is stormy and rainy, but every afternoon whenever you eye up your boots on the veranda, the weather calms out of nowhere.

And it’s as if the local deities have responded to the quiet puja without which an evening feels incomplete.

And the sun sends long shadows across the apple blossoms. And there are hares among the barley fields, and falcons in the sky.

Secret to a long life

And a funny thing happens to time, and you wonder whether the secret to a long life is not antioxidants and vitamins but – attention!

And Harari comes to mind, and you think if someone that good can admit there’s not much point having an opinion about the world if they don’t even know their own mind, then the same goes for you, mate.

And a sudden tiredness washes over you and you realise that, even here, you’re like Joyce’s Mr Duffy, living a short distance from his body.

And so you become aware of the body, of its pleasant, painful and neutral sensations, of the thoughts and emotions bound up there, and of the damaging Cartesian injunction, “I think therefore I am”, and how it ignores the ephemeral nature of thoughts as they march across the inner sky, driven by sub-rational forces, as real as any fairytale.

And yet they carry force, they get in the way – not of the chimeric ‘true self’, but of existence itself: entirely mind-created, ever-changing, often uncomfortable, and, most beautifully, lacking separation.

Retreats in Ireland and beyond

At €210 a week including food, a week in one of the solitary huts at Vajrasana Retreat Centre in Suffolk is a cheap yet very comfortable solitary venue two hours from London by train.

Yet there are facilities the length and breadth of Ireland.

In Cavan, the Tibetan Buddhist Jampa Ling centre offers a “retreat mobile” for €20 per night (food and electricity extra).

In Wicklow, the Glendalough Hermitage has fantastic little stone buildings within walking distance of the National Park for €50 a night suggested donation.

Also in Wicklow, five midweek nights at the Elbow Room in Donard start at €360, with the use of a communal kitchen.

The God Pods at Glenstal Abbey’s Benedictine monastery in Co Limerick, meanwhile, are €315 for the week while Glencomeragh Hermitages near Clonmel are about €400.

At the dearer end of the scale, Ard Nahoo eco-cabins in Leitrim start at €295 for two nights, while Dzogchen Beara in west Cork start at €505 for a week in winter, rising to €890 in summer.

Farther afield, goingonretreat.com/solitaries is a great resource for retreat venues in the rest of Europe, from the remote Scottish Highlands at Dhanakosha (€250 a week) to eco-retreats in Cornwall, and month-long solitary retreats at EcoDharma (€690) in the Spanish Pyrenees.