‘I’m a working class woman. I like tins of cheap beer, AC/DC and men with neck tattoos’

Brianna Parkins: In Ireland, I just sound Australian. You can’t tell I didn’t eat avocado until I was 23. Or that I’m missing a tooth 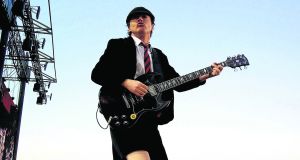 ‘I’m from the part of Sydney famous for multi-lane highways, fake designer handbags and drive-in McDonalds.’

I’m not from the golden triangle of Coogee/Randwick/Bondi where the tan lines begin and end at county jerseys and copious care packages of Taytos end up. I grew up over an hour from the Bridge and any ocean body of water. I’m from the part of Sydney famous for multi-lane highways, fake designer handbags and drive-in McDonald's. From fibro houses with massive tellies, dodgy Sky boxes and multiple cars parked on the lawn in various working states.

When people figure out my postcode they know where to mentally place me, working class white trash. Known in Aussie parlance as a bogan.

How we talk is cruelly the first giveaway and also the hardest to change. Especially in my line of work. Journalism is a fairly middle-class pursuit

But then I moved to Ireland where people don’t know where Parramatta is. They couldn’t hear it in my accent. I just sounded Australian. For the first time ever I’m convincingly middle class. You can’t tell I didn’t eat avocado until I was 23. Or that I’m missing a tooth. Or that I’ve never seen a play willingly. I don’t even have a preferred cheese. I know there are hard ones and soft ones. I also know when people ask you which one you like, you’re not allowed to say any brand that comes as a singular slice packaged in plastic. People look at you funny. And I know funny looks.

I know because I like tins of cheap beer while listening to AC/DC, loud cars with v8 engines and men with neck tattoos. If you combine all three you get the entire sum of my activities aged 16-25. I like sport where there’s a good chance of physical violence on or off the field, wearing matching Adidas tracksuits un-ironically, too much gold jewellery and going to pubs with rum and Coke that comes straight out of a beer tap (these only exist in Australia but I guess the Irish equivalent would be West Coast Cooler).

I don’t know how to ski. In fact I didn’t see snow as an adult until I moved here last year. It was unsatisfying but it was also because it was probably in a Ballymount industrial estate.

But usually I keep all these things to myself. Because like so many people who grew up in a different class environment than what they work in, I have learned to “pass”. Passing means knowing movies that you have to watch with subtitles, saying “Moet” properly and correcting yourself when you say “me mum” instead of “my mum”.

How we talk is cruelly the first giveaway and also the hardest to change. Especially in my line of work. Journalism is a fairly middle-class pursuit. It’s too precarious, lowly paid and dependent on contacts to be a safe bet for anyone who didn’t grow up going on skiing holidays.

I made a promise to myself mainly out of guilt, but a little bit of pride

There are not many people like me in it but the few of us have learned to fit in by pretending to like The West Wing. Some of us even ride bikes to work for fun and not because the car is broken down or we have a drink-driving ban.

However, the hardest part for television journos like me is looking and, more importantly, sounding like you know what you’re on about. In my experience, that means not sounding like myself. It means adopting the accent of someone who went to a better school, lived in a nicer area.

So off I went to voice coaching where I realised I’d never said the “-ing” on the end of the word. In western Sydney we say “somethink”, “nuffink”. We’re never going to do something, always “gunna go do” instead.

Knocking ‘Westie’ out of me

The first time my parents heard me do a voiceover, they weren’t sure it was me. My mum was delighted. She had spent years knocking “Westie” out of me. “It’s Sat-ur-day, not Sat-dee.” She was the one who insisted I go to a fee-paying school, learn music and go to university. All things her and my dad had not done, leaving school at 15 and working in factories. My dad worked three jobs to pay for it all. They had put in all this hard work so that I would not be like them. Their sacrifices meant that their daughter who they fed, taught to read and tolerated for 28 years sounds like a stranger.

It makes me sad to think about it, but on the other hand I’ve never heard someone who sounded like me read the news on telly. I bet if you’re from west Dublin or Limerick or anywhere not in Dublin 4, it’s the same.

When I told my career counsellor I wanted to be a journalist, she looked over her novelty cat mug and said gently: “Not many girls from Parramatta end up on TV.” She was right. Or maybe more accurately they had worked so hard not to look and sound like they were that they had made it. It had the same effect on me, confirming that this job was not for people like me. It’s why diversity and visibility in the media is more than virtue signalling. If you can’t see it. You can’t be it.

I didn’t have the proper words to explain it until I came across class and gender sociologist Bev Skeggs at university. She wrote: “Respectability is usually the concern of those who are not seen to have it.” The ones who learned to dress, walk and talk like we’re not from where we’re from and weren’t raised by the people who love us.

So I made a promise to myself mainly out of guilt, but a little bit of pride, that I would have one answer the next time someone asks me if I grew up near where they filmed Bondi Rescue.

Brianna Parkins is a journalist with Virgin Media. Hilary Fannin is on leave