How can I put my late grandmother’s house deeds in my name? 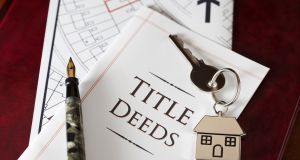 After my grandmother passed away, her children had a meeting to decide what was to be done with the family home in the absence of a will. No one wanted to take custody of the house, so my mother (one of the siblings) offered to pay each of her siblings their share of what the house was deemed to be worth, if sold on the market.

The siblings were satisfied with this arrangement although, it being a blood bond, nothing was ever put down on paper. My parents have had the house now for the past 15 years or so. I always enjoyed spending time in the house and, three years ago, I decided to move into it on a permanent basis with my parents’ blessing. They are happy for me to put it into my own name, however, having looked into the matter I can see that there are a couple of obstacles to this.

The name on the deeds is that of my great-grandmother who died in the early 1970s. As was common at the time, the deeds were never updated after her death due to the absence of a will. My grandfather, who along with my grandmother, were the next occupants, continued to live in the house up until her death in the late 1990s. None of my mother’s aunts or uncles is still alive. My mother and her siblings are the oldest remaining generation.

The house is very modest and, being as old as it is, in desperate need of refurbishment. I would like to put the house into my name or, at the very least, the names of my parents, but I am unsure how to go about it.

It shouldn’t be a problem getting my mother’s siblings to sign a piece of paper waiving their claims to the property, but would I have to go back further in the family tree than them? Does the fact that my parents have been custodians for 15 years, paying utility bills etc mean anything legally? The house is not registered with the Land Registry.

The matter is very complex unfortunately. As the deeds of the house are still in the name of your great-grandmother you would need to go back to her death to see how the title to the house has passed since then. As she died without making a will, the house would have passed on her death to her next of kin. These appear to have been your grandmother and her siblings. On each of their deaths, each of their shares in the house would have passed either under their wills or to their next of kin on intestacy.

The other issue is whether any member of the family has acquired possessory title. This might be the case in relation to your grandparents who lived there from the early 1970s to the late 1990s. They may have dispossessed the rights of any of your grandmother’s siblings. Whether or not this is the case very much depends on the circumstances of the other siblings in terms of where they lived etc and the arrangement (if any) made between the family members.

If they did acquire a possessory title then this title would have passed to your grandmother’s children on her death. If they were willing to waive their rights to the property, then this may be a way for it to pass to your mother.

If your grandparents did not acquire a possessory title, there is a possibility that your parents have done so. However, they lived in the house on the basis of an agreement to buy it and further details would be needed for a solicitor to properly advise you. Tax advice would also be required.

As I have already stated, the matter is not straightforward. In this case a full family tree would have to be examined and would have to include details given in relation to the circumstances/ arrangements made regarding your grandparents and parents’ occupation of the house.

In this case, simply living in the house for a number of years would not in itself be enough to give a family member rights to it. There are a number of elements required for someone to get title by adverse possession and it is very rarely straightforward.

Suzanne Bainton is a solicitor at Liston & Company