Wicklow cottage with zen circle, Chinese bridge and its own theatre for €585K

Knockanree Garden boasts 3.5 acres of magical gardens running down to a stream near Avoca, and a two-bed converted cottage 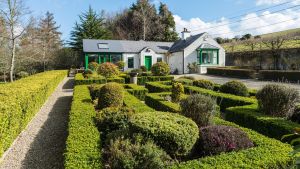 In 2015 research conducted by Emoov, an online estate agency, found that after location, a well-presented garden was second on the list of buyers’ concerns when searching for properties.

At Knockanree Garden, a two-bed converted cottage with a separate pavilion and outbuildings, it is the 3.5 acres of magical gardens that will have buyers swooning.

“All the magazines who have featured my gardens have used the term ‘peaceful’,” says Harold Clarke who renovated the property and gardens in 1995. The award-winning gardens are open to the public (in aid of an Indian charity) for parts of the year, allowing section 482 tax relief for their maintenance and upkeep.

Now retired, Clarke worked at Easons for 55 years, ending up as chairman of the company which he describes as the “nicest job in Ireland”.

Robert Myerscough, president of the Royal Horticultural Society of Ireland was engaged to design the grounds which tumble down to a stream – and transform them from the “jungle” that they were.

They now meander through paths with interesting features inspired by gardens around the globe, and include a Japanese zen circle, French parterre, a formal rose garden, a Chinese bridge across to a small island which Clarke created by diverting the stream, and the variety of specimen trees reads like a nursery catalogue.

From a laburnum tunnel to his favourite tree – a giant liquidambar – hiding amidst a variety of acers lies a wollemia nobilis. Discovered in 1994 in New South Wales, this species had been presumed extinct for 60 million years.

The cottage, which measures 154sq m (1,664sq ft), has two bedrooms, a sunroom, kitchen and a large space comprising a living and dining area. Clarke renovated what was a cow byre into a 43sq m (461sq ft) pavilion where he has hosted many musical events including the Dublin Philharmonic Orchestra. The space accommodates 65 people but its layout allows it double as a one-bed guest cottage. Opposite is a line of old sheds which could also be put to good use.

New owners will more than likely want to update some parts of the house but it is the gardens that are the selling point.

Considering the riparian setting, with many pockets perfect for meditation, the house, pavilion and gardens would make a wonderful retreat, be it for yoga or an artistic workshop, or simply a very peaceful home in Avoca.

The property is supplied by its own freshwater well, while rapids and a waterfall create a soothing background soundtrack. In addition, the stream running along the boundary is known as Sulphur Brook – and sulphur springs have been used for centuries for their holistic qualities.

Knockanree Garden is a place where you will find yourself listening to Lakme’s Flower Duet rather than current affairs radio, and it is on the market through Savills with an asking price of €585,000.