Prices in capital rose 5.8% in year to September, elsewhere they grew 10.8% on average 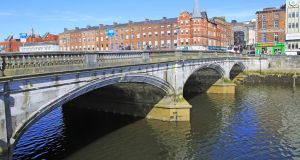 The past year has seen a significant rise in new schemes in Cork, including one of the biggest in the country, at Janeville in Carrigaline, a development of up to 1,000 homes. File photograph: Geography Photos/UIG via Getty Images

The house price inflation gap is growing faster in the regions than it is in Dublin.

According to the Banking & Payments Federation Ireland’s most recent Housing Market Monitor, for the third quarter of 2018, prices increased by 8.2 per cent in the year to September, the lowest rate of annual growth based on monthly figures since October 2016.

In the Mid West and West regions – where there are fewer large scale new house developments coming on stream – the highest house price growth was registered, up 21 per cent and 14 per cent respectively.

The new homes market is typically driven by first-time buyers. Right now this demand is supported by the Help to Buy scheme, which can only be used for new houses.

Those working in the capital get more home for their money in a commuter county, as long as they are prepared for the commute. February sees the launch of Ballinahinch Wood, a 34-unit mix of three- and four-bed semi-detached and detached homes at Ashford in Co Wicklow, where prices are expected to start in the late €300,000s. Closer to the city, The View, at Glenheron, Greystones will have four-bedroom bungalows from €555,000.

In Kildare, Ledwill Park, Kilcock has two- to four-bedroom homes for sale with prices starting at €325,000, while at Cois Glaisin, near Navan in Meath, prices start from €220,000.

In Galway, new developments include Redington Woods at Clarinbridge, Ashtown Avenue in Headfort and Gleanntán Na hAbhann in Craughwell, where four-bedroom semis are on the market at €265,000.

The past year has seen a significant rise in new schemes in Cork, including one of the biggest in the country, at Janeville in Carrigaline, a development of up to 1,000 homes. Work started on the site in April 2017 with phase two currently under construction, comprising 24 detached four- and five-bedroom homes and 74 semi-detached, priced from €310,000.

As a rough comparator, new three-bed mid-terrace homes are on the market at Belltree, Clongriffin, Dublin 13 for €390,000.

Demand for new homes in Carrigaline, which is 15km from Cork city, is strong. Selling agent Dan Howard says: “Last year was very good, and the start of this year is even better. The fact that the Help to Buy scheme is due to finish this year has speeded up people who were waiting.”

Other developments in Cork include a further release of three-bed homes taking place later this month at Kinsale Manor, within walking distance of Kinsale, where three-bedroom semis will sell from €340,000. At Drakes Point in Crosshaven, four-bedroom semi-detached houses are available from €338,000.

Several new schemes are due to release additional phases early this year too, including Ballinglanna at Glanmire, Brookhill at Carrigaline, Martello at Rushbrooke in Cobh, Heathfield at Ballincollig and Eden at Blackrock, Glountane.

“Existing established Cork developers such as O Flynn’s, Astra and Murnane & O’Shea are actively building, but there are new developers moving in too, including Gannon, Centurion, Glenveagh, Homeland and Caraden, ” says Paul Hannon, director of Sherry FitzGerald New Homes in Cork.

In the west and midwest, the picture is different. Limerick has seen some increase in its supply over the past 12 months, “however, developers are only releasing properties in small phases to keep sales and interest moving”, says Lisa Kearney of Rooneys Auctioneers.

Her agency is currently handling the sale of Ros Mor on the Ballyneety Road, a three-bed, semi-detached house on the market at €235,000, and the final three-bed available in the scheme until 2020.

New developments are even harder to come by in Galway, despite an estimated 3,000 new units being required to meet demand. Among the new homes on the market here is the phase two launch of Ashthorn Avenue at Headford, 20 minutes from Galway city, with three-bed semi-detached homes priced from €245,000.

At the end of last year, Burkeway Homes was granted planning permission for a new 197-unit residential development at Bearna, but these aren’t likely to come on the market until next year.

In the meantime, a shortage of large-scale new homes schemes in Galway means first-time buyers here are more likely to have to forego the Help to Buy scheme altogether and buy a second-hand home.

According to Niall Browne of O’Donnellan & Joyce Auctioneers, this was evidenced at the weekend when the firm had a very busy open viewing of a second-hand home at Drisin, Knocknacarra near the city. The four-bed semi is seeking €358,000 and 13 couples turned up, many of them first-time buyers.