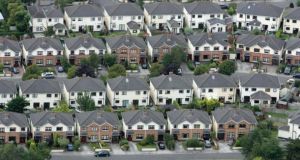 In a market that had been rising too rapidly, some agents are reporting lower selling prices because of increased housing stock on the market and longer selling times. Photograph: Frank Miller

For those looking to buy a property in 2015, the process is proving more challenging than it was just six months ago.

Following the introduction in February of the Central Bank’s new lending criteria – where buyers need to stump up much bigger deposits – potential homebuyers are under pressure to show they can afford the properties they desire.

As we pass the midpoint of 2015 the impact of these rules is beginning to resonate.

CSO figures this week showed house prices in Dublin grew by just 0.6 per cent between March and June, and in each of the five most expensive markets Dublin 4, Dublin 6, Dublin 6W, Dublin 14 and South Co Dublin, average prices have barely moved since September 2014, when the Central Bank made its announcement.

While three-bed family homes in the capital have fallen in price by almost €20,000 in the past three months according to a Real Estate Alliance Average House Price survey on Monday.

In a market that had been rising too rapidly in some areas the new rules have certainly had a cooling effect and agents are reporting lower selling prices because of increased housing stock on the market and longer selling times.

Some argue that the new rules have put pressure on properties priced around the €220,000 mark, as buyers try to purchase with a deposit of just 10 per cent. Others say prices overall are softening as sentiment took a hit following the introduction of the new rules.

For some, the new rules have yet to have any affect, as they were granted mortgage approval – up to 92 per cent– under the old regime.

However, the restrictions were introduced on February 11th, so by August all prior six-month mortgage approvals will have run out.

Ivan Gaine, head of new homes with Sherry FitzGerald, expects the autumn selling season to tell a lot, once everyone is subject to the Central Bank’s new tougher lending restrictions.

“It has had an impact on sentiment, and the pace of price growth has slowed quite significantly,” says Gaine, adding that in some places supply is up a little, which accounts for some of the softening in prices.

There is also the possibility that prices will soften further however, as homebuyers find they are unable to afford what they might have done last year. The cumulative effect of this will push prices down again.

Joey Sheehan, managing director of mymortgages.ie in Cork, gives the example of someone who had saved a deposit of €25,000.

Before the new rules, they could have bought a property worth €300,000 based on a 92 per cent mortgage.

“That person’s purchase price has been pushed down a lot,” he says.

The exemptions mean that if you’re hoping to borrow 90 per cent in Dublin or get an income multiple of 4-and-a-half times rather than 3-and-a-half times, you will still stand a chance of doing so.

According to brokers, most applicants are looking for an exemption on the income multiple, as many have been saving well and already have a decent deposit.

“If someone is looking for an exception on a multiple of income, we could secure possibly 4 or 4-and-a-half times income,” Sheehan says.

But you’ll have to be a good prospect, as banks will likely cherrypick candidates for these exemptions.

“You have different groups competing for a leeway, so the banks will favour whoever has the most money, whoever looks the best,” says Deeter, noting that where you work is a key factor, with banks typically favouring those who work in a sector such as IT over one such as retail.

These exemptions could also act to distort the market. It’s understood that exemptions will apply on an annual basis, which means that if all the banks have met their limits by December, house completions may be pushed over into January.

Goodbody Stockbrokers economist Dermot O’Leary estimates that in the first quarter of this year, one out of every two property buyers were still paying cash.

“This is surprisingly high as we suspected it would fall given the strong growth in mortgage volumes and the ending of the CGT relief at the end of last December,” he says.

In the first-time buyer market however, Gaine says cash buyers are less prevalent, although he has observed the return of cash-rich people looking to trade down to smaller properties.

Overall, if the proportion of cash buyers is sustained at 50 per cent, it will mean that just four out of every 10 buyers will be subject to the new income multiple (given the 20 per cent exemption).

This means that its impact on the market may be more subdued than originally thought.

New rules: How much can you borrow?

Firstly, a new income multiple applies, which means that borrowers can only borrow up to three times their (joint) income. The limit does not apply to people in negative equity.

Secondly, loan-to-value multiples have also been tightened, which means that those trading up can only borrow up to 80 per cent of the purchase price of a property.

First-time buyer: ‘I was conscious of time running out’

Trevor O’Sullivan (30) was very conscious of the new Central Bank lending rules when he went to purchase his first property in Cork this year.

He started looking for a home about 12 months ago and secured a loan approval for 92 per cent of the purchase price of up to about €200,000.

However, securing his first home was problematic.

An estate agent himself, supply was a factor in the duration of his search.

Tight supply translated into multiple bidders on each property he went for, and he was beaten in bidding wars on about five properties on the south side of Cork.

Trevor exited at €210,000, fearful of the scale of repayments such a property would require, and the size of the deposit needed.

“I didn’t want to put myself under pressure with repayments,” he said.

Meanwhile, there was not much time left on his six-month loan approval. “I was conscious of time running out,” he says, noting that once his approval ran out, he would then only be able to borrow up to 90 per cent under the new lending rules.

“It was a massive thing for me,” Trevor says, noting that a deposit of 8 per cent freed up money for solicitors’ fees, stamp duty, furniture, etc.

But, with three weeks left on his approval, Trevor went “sale agreed” on a two-bed townhouse in Glanmire in early March – and only had to see off one other bidder.