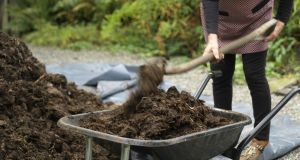 Mulch. Yes, yes, I know it’s not the most immediately seductive of words nor does it conjure up the loveliest of images, but bear with me because I want to tell you about the many wonderful things that it can do for your garden or allotment.

If it is one of the better kinds of organic mulches – examples include well-rotted farmyard manure, homemade compost, fresh seaweed (just make sure it’s harvested sustainably and with permission), leaf mould or even lawn clippings, chopped-up bracken or straw – then a generous blanket of it will prevent weed seeds from germinating and greatly help your soil to retain moisture during periods of drought (just think of last summer).

But that’s not all. That very same blanket of organic mulch will also boost earthworm and beneficial soil microbial activity, bolster soil and plant health and protect soils from compaction and erosion while simultaneously replenishing lost nutrients.

Used regularly, mulches can also be a key part of the no-dig or minimum-dig approach that’s found favour with a new generation of organic gardeners.

But even these kinds of organic mulches aside, some inorganic mulches – examples include a shallow layer (2.5cm-7.5cm) of horticultural grit or fine stone chippings – will help to lock in soil moisture, suppress weed growth and protect naked, vulnerable soils from the degrading effects of heavy rain, drying winds and intense summer heat.  Isn’t that, you’d agree, altogether pretty amazing?

When should you spread them? Spread in autumn, garden mulches act like a kind of duvet to the soil, locking in warmth, preventing winter leaching of nutrients and cushioning the ground against the worst that winter weather throws at it.

Spread lightly at this time of year when soil temperatures have risen but moisture levels are still good, they help to protect against the effects of summer drought by sealing in moisture and slowing evaporation.

Of course nothing is perfect, and so along with their many near-miraculous benefits, there are some potential downsides of garden mulches to bear in mind.

For example, both plastic weed-suppressant mulches such as Mypex and the coarser kinds of organic mulch such as cardboard, chopped straw, bracken and grass clippings can offer a safe haven for slugs, resulting in extensive damage to seedlings and young plants.

A few of the less useful organic mulches such as bark mulch or sawdust can also steal nitrogen from the soil, while if used in autumn in areas of very high rainfall or on especially heavy ground, all mulches can lock in winter wet to the point where the soil stays cold and sodden come spring.

Bear in mind that some once-popular mulches have gone out of favour such as old carpet, which used to be recommended as a weed-suppressant mulch but is now frowned upon because it can leach poisonous chemicals into the soil.

There are also some mulches – for example, fresh seaweed – that need a period of several months to properly break down before their benefits become obvious, while others – for example hay or grass clippings or even poorly stored farmyard manure – can be an inadvertent source of weed seeds.

I should also, sigh,  mention the blood, sweat and tears required to barrow and spread generous quantities of any mulch, a chore that doesn’t get easier with age, although you could argue that this brings its own health-enhancing benefits as a form of vigorous exercise.

Last but by no means least is the problem of availability. In an ideal world we gardeners would have mountains of organic mulch just waiting to be lathered onto flower beds, vegetable beds and shrubberies as required. But unless you are lucky enough to have an endless supply of homemade garden compost, a kindly farmer as a neighbour or easy access to nearby stables, real life is just not so obliging. The good news, however, is that there is an increasing range of affordable, high-quality Irish-produced options to choose from. Below is a brief guide to some of the best.

Certified by the Irish Organic Association (IOA, irishorganicassociation.ie), Enrich compost (enrich.ie) is a finely screened, peat-free nutrient-rich product made from plant material composted at a temperature sufficiently high to kill weeds, weed seeds or possible plant pathogens. Available to order in either 1-cubic metre bags from a chain of nationwide suppliers (typically €60-€85 delivered, with additional delivery charges for longer trips , see website for details) or as a loose load from the Meath-based manufacturers (minimum quantity 20m3, from €35 direct from yard plus transport costs). Their website includes a handy “quantity calculator” that will help you to work out how much you’ll need.

Produced in Co Donegal, this multipurpose, screened, nutrient-rich compost is made from organic waste material composted at a temperature sufficiently high to kill weeds, weed seeds or possible plant pathogens, and then blended with horticultural sand for added porosity. Available to collect from the Enviro Grind premises or to purchase online for delivery nationwide delivery as 50L bags (from €€), bulk sacks (1 cubic metre/€118 incl. nationwide delivery) or as a loose load from €35 per cubic metre direct from yard plus additional delivery charges. See envirogardenandhome.com

This Cork-manufactured, organically-certified peat-free product is made from horse manure composted to a temperature of 60+ C to kill weed seeds and pathogens, resulting in a chocolate-coloured, ultra-friable, odourless compost rich in plant nutrients that is perfect for use as a garden mulch. Available as small bags (12kg/ from €6), large bags (18kg/ from €8) and in bulk bags of 1 cubic metre (maximum order from 5-8 cubic metres at €110 per cubic metre). Available from many good Irish garden centres, while gardeners living within a 110-mile radius of Blarney can also order it directly from the producers, see gee-up.ie or call 021-4381485 for further details

(As a rough guide to quantities, one cubic metre of mulch is generally sufficient to cover an area of 20m2 to a depth of 5cm).

Unless you want the plants to naturalise in a semi-wild setting, it’s a good idea to deadhead faded daffodil flowers to prevent them from setting seed. This way their bulbs will fatten up underground, storing plenty of energy to put on a good display again next spring.

For the same reason resist the temptation to mow or cut away their foliage or, worse again, to bundle them up in unsightly elastic bands. Instead,leave their grassy leaves intact, allowing the foliage to die back naturally over the next 6-8 weeks.

Giving the plants a sprinkle of organic  slow-release granular fertilizer after  flowering has finished also helps these bulbous spring flowering plants to put on a great display the following year.

Climbing ornamental plants such as clematis , jasmine, trachelospermum and climbing roses are now in vigorous spring growth, so take some time to carefully train the new shoots against some form of sturdy support.

Resist the temptation to weave new shoots in and out of garden trellis as this eventually damages both plant and trellis. Instead use short lengths of garden twine to gently fasten them against it.

Most climbers will also benefit greatly from an organic, humus-rich mulch such as well-rotted manure or garden compost spread around the base of the plant at this time of year, along with a sprinkle of organic slow-release granular fertiliser. Just take care that it doesn’t come into direct contact with any plant stems, as this could encourage disease.

Continue to sow seed (under cover) of many different kinds of hardy and half-hardy flowering annuals such as cerinthe, nigella, ammi, amaranthus cosmos, perennials such as achillea, delphiniums, verbena bonariensis and vegetables such as tomatoes, leeks, chard, lettuce and Brussels sprouts for transplanting into their final positions later in the year.

For best results use a good quality seed compost and a heated mat or electric propagator, and make sure baby seedlings get plenty of natural light and protection from extremes of temperature as well as strong winds.

It is also really important to water young seedlings very gently using tepid water and a small, light can with an elongated spout, taking care not to damage their delicate leaves and stems.

Run, don’t walk, to nab the best makeup collection of the summer
5

Are we really facing the death of the office?
6