Great address in Dartry for €1.59m 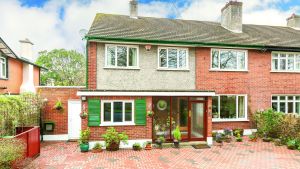 Temple Road in Dartry quietly goes about its business of being a prime Dublin address, achieving prices that easily match the best Ballsbridge roads. That’s for the detached Victorian mansions on their own extensive grounds at the Milltown end of this wide, leafy road. At the Dartry end, there have been over the years several infill developments including number 22, a semi-detached two-storey house built in the late 1950s or maybe 1960s. The redbrick and pebble dash double-fronted house has been in the same family for about 40 years and the owners are now downsizing from their 202sq m (2,184sq ft) four bedroom property.

While the house has clearly been well-cared for over the decades in that it has been updated many times and extended – there was a garage to the side which they converted to a study to the front, utility to the rear, and they added on a fine timber-framed sunroom – it’s likely new owners will do a considerable renovation.

Buyers will be drawn to view number 22 primarily because of the road and the south-facing back garden.

Mature gardens are often a labour of love but the very unusual feature of the box hedge path that winds down the centre of the garden, immaculately clipped for a formal look, is a sign of how much the garden has been enjoyed over the years by the owners. It also features well-stocked beds now coming into colour, a patio area and it benefits from having an old granite wall as its rear boundary.

The sunroom opens directly from the two interconnecting reception rooms. There’s a small eat-in kitchen with double doors to the back garden. Upstairs are four bedrooms, two with washhand basins, and on up again the attic has been converted to make a home office with an adjacent WC. The family bathroom is large and recently refurbished.

New owners, likely a family trading up with the budget to take on a house requiring updating, will likely build across the rear to create a large eat-in kitchen and family space, and update the interior. The BER of E1 is typical of houses of its age. There is a side entrance as well as off-street parking for three cars. As a very quiet, wide road, the main “traffic” on Temple Road is pedestrian, Trinity students during term time taking the five-minute walk from their college accommodation in Dartry to the Luas stop at Milltown. Lisney is the agent, asking €1.59 for 22 Temple Road.