Wicklow collector’s stash of banknotes has some rare Lady Laverys 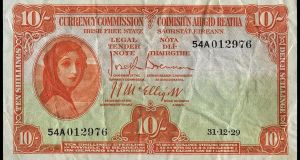 The “Lady Lavery”: Dix Noonan Webb auctioneers has announced the sale of the most comprehensive private collection of Irish 10-shilling notes ever assembled. 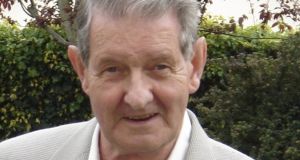 The late Tony Lenny of Co Wicklow was one of Ireland’s best-known collectors of coins and banknotes. 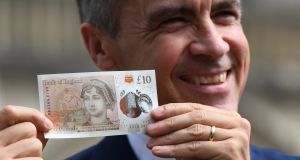 Last week, a new £10 banknote went into circulation in Britain – the first ever to feature the images of two women: Queen Elizabeth (who appears on all the country’s banknotes and coins) and novelist Jane Austen, on the bicentenary of her death.

Almost immediately, the new polymer notes began attracting the interest of collectors with examples appearing online at prices above face value. The Bank of England has already printed 275 million of the notes – so they’re not exactly scarce – but collectors are keen to get examples with low, early serial numbers.

The most desirable example – the first note printed, with the serial number AA01 000001 – won’t, however, be popping up on eBay anytime soon as it was presented to the queen. Nor will the second, given to her husband Prince Philip; the third, presented to prime minister Theresa May; or the fourth, which was given to chancellor of the exchequer Philip Hammond.

The truth is that banknotes only really become sought-after by collectors – and potentially valuable – long after they’ve been withdrawn from circulation. In Ireland, the paper currency has changed a few times in the 90 years since independence and notes that have ceased to be legal tender can, occasionally, be valuable.

The best-known, and most popular, are the “Lady Lavery” banknotes used between 1928 and 1977. They were issued in denominations of 10 shillings, £1, £5, £10, £20, £50, and £100, in the colours orange, green, brown, blue, red, mauve and olive respectively. They feature, on the front, an image of Lady Lavery from a portrait painted by her husband Sir John Lavery. The backs are emblazoned with images of Irish river gods, based on the scuptures which adorn the Custom House in Dublin.

Banknotes are a niche area of collecting and among the major Irish auction houses the only specialist is Whyte’s, which includes a selection in its sales a few times every year. In London, one of the main outlets is Dix Noonan Webb auctioneers, which has announced the sale of the most comprehensive private collection of Irish 10-shilling notes ever assembled.

They were collected by the late Tony Lenny of Co Wicklow and the first tranche will go under the hammer in the saleroom at Bolton Street in Mayfair on Monday, September 25th. Lenny, a native of Cookstown, Co Tyrone, worked for the Irish Grain Board and R&H Hall before moving to Bray, where he ran a wool shop and a bookmakers. He then retired to Wicklow town where he died in 2013, aged 88.

Lenny was one of Ireland’s best-known collectors of coins and banknotes focusing particularly on Irish and African banknotes. According to his son, David Lenny, “he made sure he had a mint condition copy of the 100 trillion dollar note of Zimbabwe as a conversation piece of hyper-inflation. He charmed some of the clerks at the Central Bank of Ireland, and the fact that he often brought them small gifts ensured that they kept a sharp lookout for, and put aside for him, newly minted coins and notes of issues and index numbers and collector sets that were of special interest to him.”

Tony Lenny’s specialty was the Irish 10-shilling note – popularly known as the 10-bob note – and, over 40 years, he acquired examples of 230 of the 231 dates issued. He missed only one – a note reputedly issued on May 15th, 1945, of which no known example survives. Some are the only known examples of a particular date or prefix and they also include rare notes from the 1920s and 1930s and some from the early 1940s, which are all stamped with single code letters as a wartime security measure. Estimates for each range from £100-£150 up to £800-£1,000 for a rare note dated December 31st, 1929.

For more details about the auction, see dnw.co.uk.