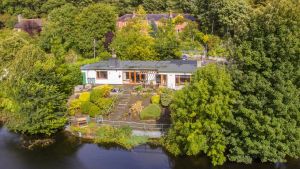 Chapelizod is an often overlooked village gem in Dublin. Despite being just 5km (a little over 3 miles) from O’Connell Bridge, the village has a country feel, full of charm and character.

Taking its name from Iseult’s chapel – the mythological King Anguish of Ireland’s daughter immortalised in Richard Wagner’s opera Tristan and Isolde – James Joyce set much of Finnegan’s Wake in its environs.

Chapelizod and the Phoenix Park area are the only addresses north of the Liffey to have an even postcode and just minutes from the village lies St Martins Row along the meandering banks of the Liffey. Number 5 is, from the outside, an unprepossessing 1960’s architect-designed bungalow with a more recent addition of an adjacent apartment.

However, if ever there was a case not to judge a book by its cover, this house is it. The dated and uninviting facade – in conjunction with a front garden comprised solely of tarmacadam – would suggest an equally cold and soulless interior. In fact the opposite is true – this is a lovely warm, inviting space where the south facing garden tumbles down to the edge of the river.

The rooms are light-filled due to the southerly aspect and large hardwood windows and patio doors.

In its current layout the house has three bedrooms and a further two in an adjacent granny flat. New owners have two options here.

They could amalgamate the two properties into one – providing 157sq m (1,690sq ft) of floor space and four to five bedrooms. Alternatively, the spaces could be left as they are and a rental income generated from the flat. Potential earnings could be around €1,600 per month.

While the house was upgraded in the last decade with new windows – and a new roof in 2015 – its new owners will most likely want to address the energy rating, which is E2.

In addition, the facade needs to be softened with planting – there is, however, off-street parking for four cars, something of a rarity in the village.

The riverfront setting is what makes this property really special.

Remember Octomom? She and her 14 kids are doing well
8

Our dream home came on the market. Then a nightmare followed
9