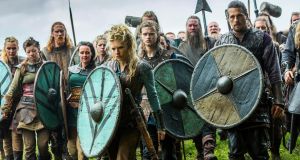 After the resounding success of the Into the Badlands sale this summer, with 100 per cent of lots sold, Co Laois-based auctioneer Sean Eacrett will host another Hollywood sale.

This time the online auction – which takes place on November 7th – will feature some of the props used in the acclaimed Vikings television series.

The historical drama, inspired by the sagas of legendary Norse hero Ragnar Lothbrok, was the first-ever scripted series ordered by the History Channel in the United States, in 2013.

Created by Emmy award-winning writer and producer Michael Hirst, the programme – which ran for six series,concluding last year – took 35 awards during its 93 episodes, with more than six million viewers tuning in for its first episode.

Lough Tay was also used as the set for John Boorman’s films Excalibur, the 1981 film based on the legend of King Arthur, and Zardoz, the 1974 science fantasy film starring Sean Connery and Charlotte Rampling, and is itself what you could call a prop: as the Guinness family imported lots of white sand, so the dark, peaty lake would resemble a pint of Guinness when viewed from above.

“It is absolutely magical,” Michael Hirst told the Daily Telegraph newspaper in 2018. “You drop down into the valley in the middle of the Wicklow mountains and are surrounded by ancient landscapes, ancient trees and ancient moss. It is timeless and truly magical.”

He added: “What was great was that we knew we were shooting where Vikings had actually been. Ireland hasn’t changed very much. It is such an authentic location and adds so much to the show.”

While the Vikings’ presence in Ireland was concentrated mainly in Dublin, Cork and Waterford, not far from the location where these scenes were filmed is a cemetery at Killegar near Enniskerry, where a number of decorated stones mark the graves of Viking people interred in the Christian graveyard. Vikings, when they first arrived in Ireland, were polytheist and had no word for religion, instead following customs focused on social behaviour, but many over time converted to Christianity.

A number of pieces from the series have already been auctioned by MGM in California, and the remaining 300 lots will feature in the Eacrett sale.

The quote “All roads lead to the throne”, synonymous with the series, is reflected in the three thrones featured in the sale: Queen Astrik’s spear-backed seat is seeking €500-€800, along with two of Ivar Pagan’s thrones (€600-€1,000) and the royal timber seat that hosted Queen Freydis’s derriere is listed at €500-€800.

Also in the catalogue of over 1,000 lots are more props from Dracula Untold, Four Kids and It, and two other television series which the auctioneer cannot name due to contractual reasons.

Also in there are horse boxes, old tractors and, should you need some for your Christmas tree, quite a few bundles of fairy figures priced at €50-€100.

Paintings include a selection of well-priced large abstract oils by Deborah Troop at €50-€100, in addition to prints and photographs.

As is the case with most country sales, taxidermy also features. Along with owls, pigeons, a rather large pike and some ducks is an unusual if not rather macabre taxidermy of a dog, which was preserved by Sligo-based taxidermist Jerard Lundy.

Representation of death or life? The jury is still out on the bizarre things that humans will preserve.

But perhaps the strangest of all is the fate of Orville, the pet cat owned by Dutch artist Bart Jansen.

Jansen turned his dead feline pet into a drone, with propellers placed on the dead cat’s paws, and now it appears he has made a business of making drones from everything from dead sharks to ostriches.

If ennui is taking its toll in this new lockdown, the cat drone is worth a view on YouTube, as it will probably help you to feel sane in these most uncertain times.

As for the Eacrett sale, viewings are not possible due to the pandemic, so interested parties can request condition reports and more information by contacting the auction house.

It is also worth remembering that the online platforms the auctioneer is using – liveauctioneers.com and easyliveauctions.com – have significant charges for winning bids.

On Easy Live Auctions, if you choose flat-fee registration it means you pay 24.6 per cent on top of the bid, whereas free registration will add 28.29 per cent onto the price. Bidding through Live Auctioneers, however, will add almost 30 percent (29.6 per cent) on top of the hammer price, which can be a significant differential on top lots, in addition to shipping costs.