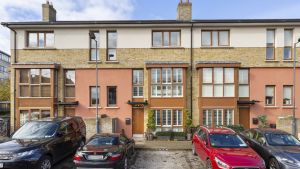 Apartments at Mount St Anne’s first came on the market in 2001, the scheme in Milltown taking the name of the convent and school that once stood on the site. Then, the contemporary design of the units in the development and its location were major selling points; as well as being in the popular well-serviced Dublin 6 suburb, access to the soon-to-arrive Luas was noted, as was the extensive grounds made up of parkland on what was once the convent’s farm and now laid out with a lake, trees, flower beds and lawn.

Those apartments were in the first phase of Mount St Anne’s; houses followed three years later and the Park Development quickly attracted a broad mix of buyers from single professionals and older downsizers to young families, for the units which range from one-bedroom apartments to five-bedroom terraced houses.

The owners of 33 Milltown Avenue bought their four-bedroom, three-storey terraced house from new. Set in a cul-de sac, it has recently been upgraded by its owners so is likely to appeal to families trading up who are looking for a spacious well-laid-out turn-key modern property in a mature development.

The apartments and houses in Mount St Anne’s feature contemporary interior detailing designed by the scheme’s award-winning architects O’Mahony Pike, and the recent works done by the owners of number 33 bring the house’s interior further up to date so there is Amtico herringbone flooring in the kitchen and utility room, white oiled-oak flooring in the hall, while the bathroom and en suites have both been upgraded. The house has been recently decorated, to include new kitchen appliances, and the windows fitted with plantation shutters.

At hall level in the 164sq m (1,765sq ft) home is the kitchen and an open-plan sitting room/dining room opening out to the rear garden. There’s also a guest WC and a utility room.

Upstairs on the first floor is another living room; this one larger, with a deep bay to the front and a window overlooking the rear garden. The first of the four bedrooms – adjacent to a shower room – is on this level. On up again is the family bathroom and three more bedrooms, the largest is en suite while the smallest, a single, is currently used by the owners as a dressing room.

The rear garden is west-facing. The Luas had just arrived when the present owners moved in – the residents of Mount St Anne’s have their own access, via a gate to the rear of the quiet development, to the Milltown Luas stop. Number 33 comes with parking for two cars to the front. It is for sale through Lisney asking €850,000.