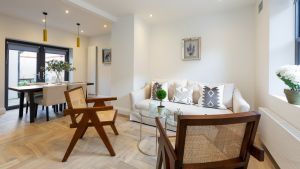 Home Villas is a U-shaped crescent of streets lined with red-brick terraced homes in Donnybrook. While tiny in size and opening straight on to the street, their proximity to Herbert Park, one of Dublin 4’s prime public spaces, means that they continue to command premium prices for the ease of access to its amenities. Dog walkers in their hundreds pay worship daily, as do the sports teams and exercise groups that pepper its swathes of green lawn.

The park has been a lockdown lifeline for locals availing of a daily dose of fresh air and enjoying its autumnal hues. For a small area, Home Villas sees a healthy turnover of housing stock. There have been 21 sales recorded in the past five years alone.

The same agent is now selling number 21, a 60sq m mid-terrace that has been extended and upgraded with about four sq m added to its original size. The two-bed was purchased last March for €430,000; then it had come to market seeking €445,000 with a G BER.

Now boasting a B2 energy rating the two-storey house has an asking price of €625,000 through Lisney. Laid out in a mainly open plan fashion, the property opens from the street into the living room with the stairs to the left and the kitchen and dining area occupying an L-shape to the rear. It is set out with smart black units and all appliances included, with doors opening out to a small, east-facing yard.

In this Covid era of working from home, the addition of a small office to the rear of the kitchen is timely, especially since you can shut out ambient noise by closing its Crittal steel-style door. Upstairs there are two bedrooms and a shower room.