The splendid and tragic history of Irish country houses 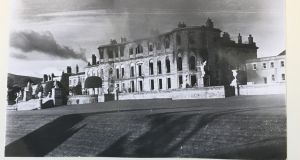 “How American plutocratic agents scoured Irish country houses like vultures around decaying carcasses in the 1920s” and “How important Irish art collections, including works by Caravaggio, Rembrandt, Rubens and Canaletto, left Ireland” are just some of the topics at a conference being held at the conference Country House Collections: Their Past, Present and Future, in Maynooth University.

At talk by Prof Terence Dooley, They Found Hens Roosting on Valuable Oil Paintings, examines how social and political revolution contributed to the dispersal of Irish country house contents, and how these losses were also affected by British and Irish government legislation.

Further talks include the contribution of an Irish man, Laval Nugent, to the arts in Croatia. The city of Rijeka has been celebrating the Westmeath man as an important figure for more than 200 years.

Nugent, originally from Ballynacor House in Co Westmeath, liberated Croatia from the French while also liberating Rome from French occupation – earning him the tile of papal prince from Pope Pius VII. His contribution to Croatia went beyond that of a liberator, and his benevolence to the arts, led to the establishment of the first museum in Croatia.

Also included is a discussion on four generations of the Gibton family of cabinet makers, whose extensive works are featured some of Ireland’s most historic houses – Ballyfin, Lissadell and Newbridge to name but a few.

A small mahogany wine cooler by Williams and Gibton sold recently through Sotheby’s in New York for $11,875 (€10,600), showing that these are still highly collectable items.

On a lighter note, The Collecting and Curating of Characters in the Big House tells the story of Elizabeth Bowen, chatelaine of Bowen’s Court in Co Cork, and the rich characters she entertained at her residence, including Virginia Woolf and Iris Murdoch.

Lecture topics include the estates of Farmleigh, Carton House, Marlfield, Powerscourt and Palmerston, and also discuss gifts to the National Gallery, including that of the Beit Collection.

The conference is open to the public, and will appeal to owners, managers and curators of historic houses, in addition to anyone with an interest in architecture and art. Tickets are from €80.