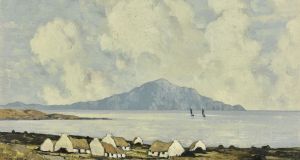 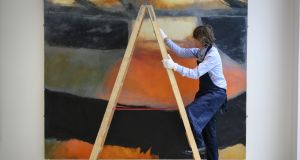 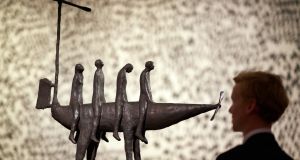 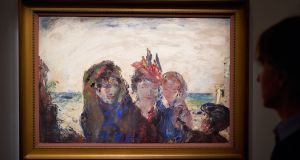 A Paris of the West by Jack B Yeats on display at Sotheby’s. It sold for €787,964. Photograph: Michael Bowles/Getty Images for Sotheby’s 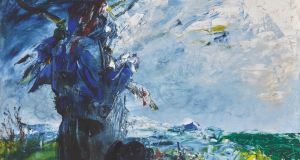 A total of 106 works went under the hammer at the event in Mayfair, achieving €3.4 million.While all eyes were focused on works by Jack B Yeats, Roderic O’Conor and Louis le Brocquy, including two lots from cash-starved RTÉ, it was the last item at the sale that raised eyebrows.

A Sotheby’s spokesperson said this was a new record for the artist against his previous record at auction when in 2007 one of his works achieved €37,000.

Another lot to sell well beyond its asking price was Failing Better maquette III, a 161cm cast bronze sculpture by Rowan Gillespie, which achieved €80,255, almost four times its lower estimate of €22,600.

Cork Bowler by Gabriel Hayes – two bowlers at Lough Gur in Co Limerick – which came from the collection of former motorsport boss Eddie Jordan, achieved €94,949 against a reserve of €33,900–€56,500, marking a record price for the artist. The work was purchased by a US buyer.

Prior to the sale a leading figure in the sport of road bowling, the former Ból Chumann na hÉireann president Séamus Ó Tuama, appealed for a benefactor to come forward to purchase the painting for public display given its significance.

Of the three lots submitted to the sale by RTÉ, George Campbell’s Symphony Orchestra was sold prior to the auction, and an announcement is expected in the next few weeks as to the buyer and the destiny of the painting.

Arabella Bishop, head of Sotheby’s Ireland, said it was “pleased with the strong results and robust international bidding”, and thrilled to see contemporary artists recognised amid three auction records.