Jack B Yeats: More than 30 works to go on display ahead of RDS sale 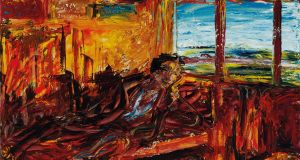 The Ernie O’Malley Collection exhibition at the RDS on November 23rd, in advance of Monday’s sale by Whyte’s and Christies, is an opportunity to see what has been hailed as the “best showing of large Jack B Yeats paintings ever seen outside major public galleries” after its recent showing in London and New York.

The Mayo-born freedom fighter rose quickly through the ranks of the Irish Volunteers and the Irish Republican Army to become a Commandant-General at just 24, and was given a state funeral upon his death in 1957.

Described as a “complex soul, one of the key figures of both the Irish War of Independence and the Irish Civil War” by New York University, which acquired his personal papers in 2012, O’Malley subsequently went on to become a writer, spending his life devoted to the arts. He once said: “My soul lies with the arts. In them lies happiness. I hope to be able to restore Ireland’s interest in them.”

The collection of over 100 lots includes 34 works by Jack B Yeats; some larger oils and a selection of small sketches at prices that will allow collectors to own a work by the artist often hailed as Ireland’s greatest painter.

The friendship between Yeats and O’Malley began in 1937 at the home of art historian Constantine Curran. Both were sympathetic to O’Malley’s republican outlook and both men shared a passion for the West of Ireland; Yeats’s love of Sligo is evident in so many of his works, and Castlebar-born O’Malley returned to Ireland after time in the US to live in Burrishoole Lodge on Clew Bay.

But it was O’Malley’s belief in Yeats as a painter that saw the international development of the artist’s reputation.

In 1945, O’Malley brought Sir John Rothenstein, director of the Tate Galley in London to meet Yeats at his studio in Dublin, whereupon one of his larger works, Two Travellers, was purchased by the Tate, followed by an exhibition at the gallery in 1946.

In Ireland, a 180-painting exhibition – several of which were owned by O’Malley and his wife Helen – attracted more than 20,000 visitors at the National College of Art on Kildare Street in 1945. O’Malley wrote an essay for the catalogue, which has been hailed as “one of the most influential texts published on Yeats in the artist’s lifetime” according to art critic Dr Roisin Kennedy.

The story of another friendship comes to light from the Dorothy Balmer Collection at de Vere’s Irish Art Sale on Tuesday, November 26th, at the Royal College of Physicians on Kildare Street.

Dorothy Balmer was working as a nurse in Belfast when romantic expressionist painter Daniel O’Neill was admitted for a rehabilitation programme following “a bad struggle with alcoholism”.

Having gone through a personal crisis after the departure of his partner of 10 years, Maureen Boyce O’Neill, the artist turned to alcohol, and for some time had struggled to paint, or complete works he had begun.

A year after meeting Palmer, O’Neill had joined a health club, attended AA meetings and held his first exhibition after a 17-year gap.

Expressing his gratitude for her kindness, that she unknowingly had given him “the most priceless gift possible… that is the will to paint” he presented her with a William Conor crayon drawing.

Balmer said she could not accept the work, as the only paintings in her home were two pictures by her mother and aunt, which would look “amateurish beside the Conor”.

After the initial disappointment of the gift’s rejection, O’Neill found a solution; to present her with more paintings to hang beside the Conor, five of which – along with correspondence between the pair – are included in the sale.

The works represent a friendship built on the kindness of a nurse who helped the artist to overcome his “tension, depression, emotion and tears”. O’Neill’s works feature at the Hugh Lane Gallery and Ulster Museum.

Also included in the de Vere’s sale, along with works by Tony O’Malley, Patrick O’Reilly, Sean Keating and Norah McGuinness is Anthropomorphic Bean, a bronze sculpture by Frederick Edward McWilliam. The piece was part of the Lehman Brothers collection in the World Financial Centre in New York and was removed days after the collapse of the Twin Towers in 2001. (€25,000-€35,000) See deveres.ie