Old Masters put in their place by newer artists

While the growth in demand for Irish art is likely to continue, their owners appear to be reluctant to sell 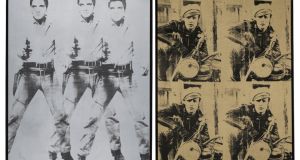 The boom – or bubble – in the international art market looks set to continue in 2015. The big international art auction houses are benefiting from unprecedented levels of spending and strong global demand primarily for post-war and contemporary art – a category defined as “art made since 1945”.

The Old Masters of the past have been comprehensively elbowed aside by the new “stars” including Francis Bacon, Andy Warhol, Roy Lichtenstein, Willem de Kooning, Martin Kippenberger, Cy Twombly and Jeff Koons, whose paintings and sculptures now routinely sell for tens of millions.

Commenting on the phenomenon, which shows no sign of abating, Steven Murphy, Christie’s chief executive officer, says enjoying works of art “has become a universal pursuit in our time”. However, he doesn’t add, owning the most sought-after works is now confined to the super-rich.

Anonymous bidders – believed to include hedge-fund managers, Russian oligarchs, South American and Chinese billionaires and Middle Eastern royals – show no sign of slowing the torrent of money they’re pouring into art, regarded by some as a safe, alternative investment amid continuing global economic jitters.

At the most recent auction of post-war and contemporary art in Christie’s, New York, buyers spent a stupendous $850 million (€680 million) in just a couple of hours. The most notable price – $81.9 million (€65.5 million) – was achieved for a 1963 painting by Andy Warhol titled Triple Elvis . The painting depicts Elvis Presley as a gun-toting cowboy (in triplicate) and had been hanging in a German casino, as had Warhol’s Four Marlons (Brando), which made $69.6 million (€55.6 million).

Among other gems in the sale, contemporary New York artist Robert Gober’s installation piece Three Urinals which, according to the catalogue, “recontextualises the idea behind what constitutes art”, sold for $3.5 million.

The Irish art market is an altogether more sober, less frothy place. The big three Dublin art auction houses – Adam’s, de Veres and Whyte’s have expressed cautious optimism that 2015 will see further signs of the slow, post-crash recovery that was under way last year. However, not unlike the housing market in south Dublin, there is a shortage of supply, according to some of the auctioneers.

That’s not the case though at Adam’s, according to managing director James O’Halloran who says “the market for Irish art is continuing to gain momentum and prices are getting better after a torrid few years”. He cautions that “purchasers are still circumspect, however, and they still look for good value”.

The highest price achieved for a painting at auction in 2014 in Adam’s, and, indeed, in Ireland, was €210,000 (a far cry from the boom days) for Chemin Mènant à Grez by Roscommon-born Impressionist Roderic O’Conor.

The other top prices at Adam’s last year were for paintings by Paul Henry and Jack B Yeats, described as “the blue-chip artists of the 20th century”, while there was also some evidence that “the demand and prices for some of Ireland’s contemporary artists is continuing to increase”.

Whyte’s and de Veres say that while there is likely to be strong demand for art in 2015, both are having trouble persuading owners to sell. Whyte’s managing director Ian Whyte says he has “found it very difficult to get owners to sell rarer and more valuable art at auction” during the past 12 months and blames “the high rate of capital gains tax and the low or non-existent deposit rates for the proceeds of any sales”.

He says many art owners were also reluctant to sell at the moment because of a “general feeling that prices for art of rarity and quality can only improve over the next decade”. Auctions aside, Whyte says there was a growing trend for owners to sell art via private treaty sales which, surprisingly, accounted for about 30 per cent of Whyte’s sales in 2014.

De Veres’ director Rory Guthrie says he currently has “clients prepared to pay top prices for top quality, but there is a shortage”.

“Recent talk of economic recovery in Ireland has had a curious affect on the market. Prices have been improving for the last 12-18 months but supply for top quality paintings has slowed rather than increased. The need for vendors to sell may have receded, or perhaps they feel that holding their paintings will result in a higher price in 12 months.”

Guthrie says the low prices for some of “Ireland’s finest artists” of the 20th century, including Tony O’Malley and Patrick Collins, “continue to defy logic”, but “contemporary art has held up very well” and there has been “strong prices for Martin Gale and in particular Donald Teskey” last year.

Competition in the Dublin art market will increase further in 2015. Sheppard’s, the Durrow, Co Laois, auction house has opened a valuations office and showroom in Ballsbridge and has already used it to showcase its first dedicated art auctions.

Sheppard’s is now actively competing for consignments from Dublin vendors and is expected to hold at least two major art auctions in the year ahead in addition to its traditional three-day general antiques sales. The west Cork auctioneer, Morgan O’Driscoll is also now a regular in the Dublin market and stages auctions in the RDS.

Some Irish vendors choose to sell art in London rather than Dublin and, with sterling having risen strongly against the euro in the last year, more may be tempted in 2015. While the main market for Irish art is, and always will be, in Ireland, owners of paintings by Irish artists who have a big English following such as Sir William Orpen and Sir John Lavery have the option of selling through the major London auction houses – Bonhams, Christie’s and Sotheby’s – all whom maintain representative offices in Ireland.

The top price at auction in London for a painting by an Irish artist in 2014 was £686,500 at Christie’s for The Bathing Hour, Lido, Venice by Sir John Lavery. In New York, a triptych painting titled Three Studies for a Portrait of John Edwards by Dublin-born painter Francis Bacon – classed as a British artist in the international art market – sold for €80.8 million.

The price was significantly below the $142.4 million achieved in 2013 for a similar life-size triptych by the artist titled Three Studies of Lucian Freud, which retains the record for the world’s most expensive artwork sold at auction. However, 2015 could see new records established.

Irish holidaymakers have been thrown under the bus
4