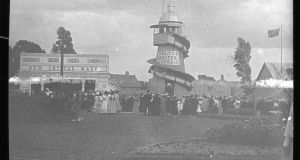 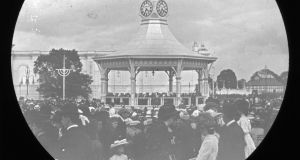 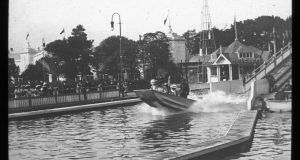 A collection of newly discovered images of the 1907 Irish International Exhibition, a spectacular World’s Fair held in Dublin, will be published online today by the Church of Ireland’s RCB Library.

The exhibition, a combination of trade fair and amusement park, was held in Herbert Park, Ballsbridge, and attracted 2.75 million visitors between May and November.

Huge temporary buildings were constructed, including halls showcasing companies such as Chivers and Oxo, and a Somali village depicting life in colonial British Somaliland.

But the most popular attractions were amusements such as a Shooting Jungle hall, a Helter Skelter Lighthouse, the New Crystal Maze and a water chute, reputedly the highest in the world at the time. The vast site was dismantled after the exhibition and only the bandstand and a pond survive today.

The images are among a collection of lantern slides found in the deanery at Killaloe, Co Clare. Dr Susan Hood of the RCB Library said: “Digital technology makes it possible to share these sometimes haunting and atmospheric images of times gone by with a worldwide audience.”

The collection also includes a selection of slides with images of people and places in Edwardian Ireland and can be viewed on the library’s website at www.ireland.anglican.org/library/archive.

Covid-19: The fallout for families has been immeasurable
6