Dancer has become one of the most expensive living Irish artists 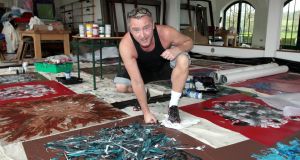 Michael Flatley in his studio: the sales of his work at an Irish and international art auction show he is now second only to Jack B Yeats in the list of the highest prices for paintings achieved at auction in Ireland thus far in 2015

Almost overnight, Michael Flatley has become one of the most expensive living Irish artists. As expected, his paintings – which were seen by the viewers of the Late Late Show last weekend – were the top performers in Monday evening’s Irish and international art auction by Morgan O’Driscoll Auctioneers at the RDS in Dublin, where The Power sold to “an international buyer” for €77,500 (within its estimate of €70,000-€90,000); and Flight of the Quetzal sold “to an Irish buyer” for €44,000 (€40,000-€50,000).

The results show that Flatley is now second only to Jack B Yeats in the list of the highest prices for paintings achieved at auction in Ireland thus far in 2015.

After the auction, Flatley told The Irish Times he was “very happy with the result” and “delighted that people seemed to enjoy” his work.

He did not attend the auction as he was overseas for a break following the end of his international farewell dance tour. He said art was his new “passion” and he was continuing to paint – mostly now in a studio at his house in Barbados, where he is “inspired by the light”, rather than in the studio at his Co Cork mansion, Castlehyde.

Flatley’s next venture into the art market will be a selling exhibition of his most recent paintings – in London, in June – for which details will be announced shortly.

A Victorian painting, titled Still Life with a Pineapple, Roses, Carnations, Cob Nuts, Peaches, a Pear, Black Grapes, Raspberries on a Parcel Gilt Tazza with a Parcel Gilt Casket on a Table, by English artist Edward Ladell, made €16,000 (€17,500-€25,000).

Hilary Fannin: What I wish my spouse and I had done the morning of our wedding
6