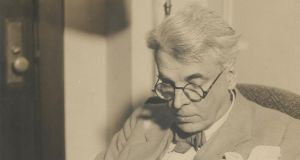 House clearance sale of a property on Wellington Road in Dublin 4, along with other items with a total of 800 lots. A selection of cut-glass chandeliers along with art deco lampshades feature as do a vast array of Georgian and Regency furniture. Of interest is lot 587 – a dress designed by Joanne Hynes for the singer Sinéad O’Connor, with the hand stitched inscription “Joanne Hynes specially for Sinéad O’Connor. The singer had previously donated the dress to St Catherine’s hospital in Newcastle, Co Wicklow, where it was purchased at a charity auction many years ago. The estimate is €100-€200 for the dress, which also includes a non-contemporaneous handbag. See mullenslaurelpark.com

This auction of almost 700 lots includes paintings by Percy French, Colin Middleton and George Campbell, period furniture and a selection of African artefacts (65 lots) from Allen Denton Miller, whose collection spans more than 60 years. Lot 430 is an Akan gold dust container, cast in brass and presumed to date from the early 19th century (estimate: €750-€1,200). Also forming part of the auction are many taxidermy items; from a tiny wren to a 19th century bear more than 1.5m tall (€1,500-€3,000). See victormeeauctions.ie

This sale of fine books, atlases and manuscripts includes items of Irish interest. Lot 28, a letter announcing the expulsion of Robert Emmet and fellow students from Trinity College in 1798 for being members of treasonable societies, with two lists of all 19 expelled, has an estimate of €1,200-€1,700. Lot 261 is a typescript draft, with autograph revisions and corrections, of WB Yeats’s play The Words upon the Window Pane, signed and inscribed by Yeats on the title (€2,300-€4,700). Lot 262 is a signed photograph of the dramatist bearing the inscription: “For Belinda Duncan from WB Yeats Nov 24 1932” (€1,700-€2,300). See bonhams.com