New Homes 2019: A 6km Blue Way will link this commuter hotspot to Maynooth 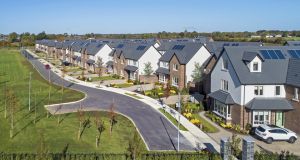 Joint agents Hooke & MacDonald and Coonan New Homes is selling Millerstown for McGarrell Reilly, an estate with planning for 150 homes situated a 10-minute walk from the station

In terms of development Co Kildare is one of the busiest counties within the commuter belt, with 57 active sites across the county, says Peter Minnock, director of services, planning and strategic development at Kildare County Council.

One of its main urban commutes is along the northwest regional commuter train line. With rising prices in Maynooth, a university town where home buyers with children tend to remain, house-hunters looking for value are moving out six kilometres to where Co Kildare borders Co Meath, on the 15th lock of the Royal Canal at Kilcock. Crucially, it remains within Irish Rail’s short hop zone.

Train services are heavily trafficked but reliable. There is a new – albeit unconventional – proposed local access route. The Blue Way is a 6km cycle and walkway in the planning along the canal between Maynooth and Kilcock. “It offers a way for local people to commute, get exercise and not breathe in fumes while they’re doing it. It’s also a safe way for schoolkids to get to and from school and college, because schools traffic is one of the biggest causes of congestion.”

Agents DNG are handling the sale of Fenton Green, a development of 63 houses and apartments on Church Street by Grandbrind, while agents Sherry FitzGerald will be launching about 35 properties at Ledwill Park for Glenveagh Homes in the coming weeks. A mix of two-bed terraced houses start from €275,000 up to €290,000 for end-of-terrace units, with three- and four-bed semis respectively from €325,000 and from €400,000.

Joint agents Hooke & MacDonald and Coonan New Homes is selling Millerstown for McGarrell Reilly, an estate with planning for 150 homes situated a 10-minute walk from the station. With about 40 sold to date, the agents are launching another 20 three-, four- and five-bed homes with prices ranging from €327,000 to €525,000.

Housing crisis: ‘We must avoid any kind of knee-jerk reaction’

Pasta is not past it when it comes to nutrition
9

Stillbirth and siblings: Children need to learn how to grieve
10