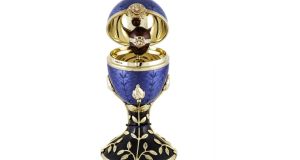 The Faberge brand evokes wealth, opulence and the world’s most extravagant Easter eggs.

The small, intricately-decorated objects, which the Russian royal House of Romanov commissioned from jeweller and goldsmith Peter Carl Faberge, in the mid 1800s, remain some of the most exquisite decorative works ever created.

The jewellery house was dissolved in 1917, when the Russian Revolution brought more than 300 years of Romanov rule to a violent end.

Its legacy reads like an intriguing novel: that of a fallen dynasty, the execution of the most opulent family in history – whose wealth in 1917 was estimated to be $45bn – and tales of imposters and lost treasures.

Imperial eggs are the most famous of all Faberge creations, with just 52 ever made, and of those, 46 are still believed to be in circulation. They can be found in the royal collection of Queen Elizabeth – who has three - and in the Faberge Museum in St Petersburg, with the remainder in private collections.

Very few of the imperial eggs come to the market, but when they do appear, the prices achieved are invariably jaw-dropping. The Rothschild’s Egg when sold through Christie’s in 2007 achieved almost £9 million.

In 2015, a fortunate scrap dealer in mid-west America purchased an old egg with the intention of using the metal, only to discover it was in fact an imperial egg and valued at € 33m.

In the most expensive Easter egg hunt in the world, many treasure seekers are still in search of the six or seven missing eggs, (still a matter of debate) which have an estimated total value of € 300m.

Each egg, which took more than a year to complete, were considered at the time to be the epitome of craftsmanship and are today considered to be works of art rather than jewellery.

The 500 or so master craftsmen – the top two designers were women – operated in a very industrial democracy, despite living under one of the world’s tightest autocracies.

Peter Faberge, despite catering for the wealthiest of Russian families, employed and trained humble mostly-illiterate folk, and gave them free artistic reign. He established four jewellery houses in Russia and one in London, before the revolution.

After 1917, some of these craftsmen and women returned to their native lands – many were Finnish and German – and continued to create bespoke pieces.

In parallel, the Faberge house later sold its brand to Unilever, and over decades, in a series of complicated acquisitions and mergers, the brand has now come to be owned by mining company Gemfields.

But some of the families of the original jewellers continued to create bespoke jewels, using the same techniques handed down through the generations, and did so until recently under the Faberge brand.

One such was Victor Mayer in Pforzheim, Germany – who has no link to the main market brand today – whose atelier, run by his descendants, created a limited-edition egg to mark the 80th birthday of Queen Elizabeth in 2006.

Number 14 of the 26 eggs created, which comes boxed with a certificate of authenticity, features in O’Reilly’s jewellery sale on September 25th. The egg, which has an 11ct ruby set on rose gold, is listed with an estimate of €7,000-€7.500.

The first is a set of old opera glasses owned by an Irish family for three generations, with enamel work embellished with pearls and semi-precious stones (€1,000-€ 1,500). The second offering is a set of six champagne flutes, and what many in the trade refer to as Fauxberge – as they have no link to the original craftsmen – but sell under the current Faberge brand (€ 200-€300).

A vase of the same period, in a similar style, was purchased by London-based ceramics expert Richard Peters through the auction house for €110,000 in 2010, according to Philip Sheppard. See oreillysfineart.com and sheppards.ie