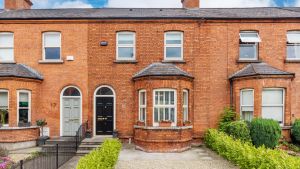 It’s clear from its exterior that 15 Botanic Road has had a recent upgrade. There is a pair of smart looking – and practical – timber porch doors, painted black, white plantation shutters on the sash windows and a newly landscaped for low maintenance front garden.

The owners bought a little over two years ago intending to stay much longer – hence the renovation work and top-to-bottom redecoration – but their plans have changed and they are moving out of Dublin to be closer to family.

The work included installing a new fitted kitchen in the ground-floor return, converting the bedroom in the first-floor return into a large shower room (though keeping its cast iron fireplace which is an attractive feature) and updating the adjacent bathroom which still has its original high-cistern Victorian loo.

The three bedrooms are doubles; the main one runs the width of the house at the front. Both bedrooms at first-floor level have high ceilings adding to the sense of space, and the third smaller double is in the top return.

Downstairs one of the changes was laying a stylish blue and grey floor tile in the hall – the original stained glass in the front door adds more colour.

The two reception rooms interconnect and both have cast iron and decorative tile fireplaces while the front room benefits space-wise from the deep bay.

There is a breakfast room to the rear opening into that renovated galley kitchen in the return.

To the rear there is a double garage at the end of a 50ft garden. The owners rarely park in the garage though, preferring to park around the corner on Lindsey Road where they have two on-street permits. It’s a short walk to Phibsborough or Drumcondra and then on to the city centre.

Botanic Road is long – stretching from Hart’s Corner to the National Botanic Gardens and number 15 is at the Hart’s Corner end. Viewers of number 15 will probably also want to have a look at the area’s new development just along from number 15, Daneswell Place, where the four- and five-bed houses are selling from €755,000 to €995,000.

The strange cases of healthy people who want to be disabled