Sandymount period home in need of TLC from €1.75m 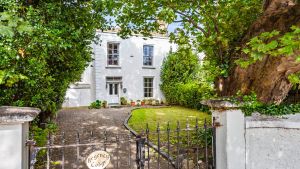 A period house in Sandymount a few minutes’ walk from Aviva Stadium is to be sold at auction on October 10th. Regency Lodge at 12 Herbert Road is a 223sq m (2,407sq ft) semi-detached four-bed in need of complete refurbishment.

Prospective buyers will have to assess carefully what structural work needs to be done to it. Damaged plaster and some ceiling stains suggest damp, although the house – which has gas-fired central heating – feels surprisingly warm. It has an AMV (advised minimum value) of €1.75 million through selling agent Lisney.

That said, Regency Lodge has many of its original period details that include ceiling cornicework, large marble fireplaces, sash windows with shutters, original banisters, although no centre roses. The house, lived in by one family since 1960, was built in 1820, one of a row of handsome period houses in a terrace opposite the Sandymount Hotel.

The two interconnecting reception rooms on the right of the front hall both have large white marble fireplaces and double doors opening from the drawingroom at the front to the diningroom at the back of the house.

Steps at the end of the hall lead to a small breakfast room, kitchen and a garden room at the side of the house, between the garage and the back garden. New owners will likely revamp and extend this whole area to create a modern open-plan living/kitchen/dining space.

Upstairs, there’s a double bedroom and a bathroom on the return and on the top floor, three bedrooms, two large doubles and a small single. There’s a large marble fireplace in the main bedroom, which looks over Herbert Road, and window shutters with pretty decorative detail.

The 13.7m (45ft) long back garden has lots of mature trees fringing a gone-to-seed lawn; it backs at the end on to houses in a small development called Lansdowne Square. There’s plenty of room for parking in the front garden.

Buyers will pretty certainly replace the bathrooms and perhaps create an en suite for the main bedroom in the single bedroom next to it.

Selling houses at auction has been rare since the property crash – but Lisney has a number of houses in similar condition to this one coming to the market in the next few months. A number of 12 Herbert Road’s neighbours have been sold and revamped in recent years: number 2 Herbert Road was pretty much rebuilt before selling in 2017 for €2.85 million. Number 10 was sold at auction in 2009 for €2.03 million and put up for sale again in 2017 for €2.2 million.